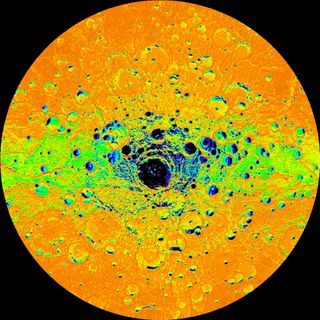 This image of Mercury’s south polar region from NASA’s Messenger probe shows a map colored on the basis of the percentage of time that a given area is sunlit; areas appearing black in the map are regions of permanent shadow.
(Image: © NASA/Johns Hopkins University Applied Physics Laboratory/Carnegie Institution of Washington)

Mercury is the closest planet to the sun. But although it boasts the most widely varying temperatures in the solar system, it is not the hottest planet How is this possible?

Orbiting between 28 and 43 million miles (46 and 70 million kilometers) from the sun, Mercury, also the smallest planet, feels the brunt of the solar rays. According to NASA, the tiny world suffers the most extreme temperature range of any other planet in the solar system. The day side of the planet reaches temperatures of up to 800 degrees Fahrenheit (427 degrees Celsius). In contrast, the chilly night side can get as cold as minus 290 F (minus 180 C). The planet has an average temperature of 332 F (167 C).

These variations are relatively long-lived. Scientists once thought that Mercury kept a single side perpetually facing the sun, in a condition known as tidal locking. Because the planet lies so close to the sun, it could only be studied when it showed the same rocky, cratered face toward Earth, though at different points in its orbit. However, further studies revealed that the planet spins very slowly — only three times every two Mercury years, or once every 60 Earth days.

Mercury's low mass and proximity to the sun keep it from having anything but the thinnest of atmospheres, and this is the reason it must pass on being the hottest planet. An atmosphere helps to cloak a planet, keeping heat from leaking into space. Without an atmosphere, Mercury loses a great deal of heat into space, rather than sharing with its night side.

The hottest planet, incidentally, is Venus, the second body from the sun. Venus has a thick atmosphere that blankets the planet, keeping its temperature at an average of 864 F (462 C).

On Earth, seasonal temperature shifts are caused by the tilt of the planet's axis. If the Southern Hemisphere is closer to the sun than its northern counterpart, it experiences spring and summer instead of autumn and winter. But on Mercury, the planet has essentially no tilt, which means that the hemispheres experience no significant difference in temperature from one another.

That allows Mercury, the closest planet to the sun, to hang onto ice at its surface. Parts of the poles never see sunlight, leading scientists to hypothesize that ice could survive on the world. Observations made from Earth in 1991 identified unusually bright patches that corresponded with craters mapped by Mariner 10 in the 1970s. When NASA's MESSENGER spacecraft studied the north pole in 2011, it confirmed that radar-bright features at the poles were consistent with shadowed regions. In 2012, MESSENGER used a technique known as neutron spectroscopy to measure the average hydrogen concentrations in the radar-bright regions, strengthening the case for water.

After the discovery, MESSENGER continued to study the polar ice deposits over its extended mission. By refining the imaging, MESSENGER captured images of the deposits on the surface.

"There is a lot to be learned by seeing the deposits," Nancy Chabot, instrument scientist for MESSENGER's Mercury Dual Imaging System, said in a statement.

However, Mercury has the least circular, most eccentric orbit of all the planets. The huge range in its distance from the sun means that the planet does feel some variation in temperature based on where it travels over the course of its 88 Earth-day year.