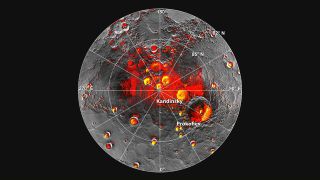 Shown in red are areas of Mercury’s north polar region that are in shadow in all images acquired by MESSENGER to date. Image coverage, and mapping of shadows, is incomplete near the pole. The polar deposits imaged by Earth-based radar are in yellow (from Image 2.1), and the background image is the mosaic of MESSENGER images from Image 2.2. This comparison indicates that all of the polar deposits imaged by Earth-based radar are located in areas of persistent shadow as documented by MESSENGER images. Image released Nov. 28, 2012.
(Image: © NASA/Johns Hopkins University Applied Physics Laboratory/Carnegie Institution of Washington/National Astronomy and Ionosphere Center, Arecibo Observatory)

It's time to add Mercury to the list of worlds where you can go ice-skating. Confirming decades of suspicion, a NASA spacecraft has spotted vast deposits of water ice on the planet closest to the sun.

Temperatures on Mercury can reach 800 degrees Fahrenheit (427 degrees Celsius), but around the north pole, in areas permanently shielded from the sun's heat, NASA's Messenger spacecraft found a mix of frozen water and possible organic materials.

Evidence of big pockets of ice is visible from a latitude of 85 degrees north up to the pole, with smaller deposits scattered as far away as 65 degrees north.

The find is so enticing that NASA will direct Messenger's observation toward that area in the coming months — when the angle of the sun allows — to get a better look, said Gregory Neumann, a Messenger instrument scientist at NASA's Goddard Space Flight Center in Maryland. [Latest Mercury Photos from Messenger]

"There is an ongoing campaign, when the spacecraft permits, to look further northward," said Neumann, the lead author of one of three Mercury studies published online in the Nov. 29 edition of the journal Science.

Researchers also believe the south pole has ice, but Messenger's orbit has not allowed them to obtain extensive measurements of that region yet.

Messenger will spiral closer to the planet in 2014 and 2015 as it runs out of fuel and is perturbed by the sun's and Mercury's gravity. This will let researchers peer closer at the water ice as they figure out how much is there.

Similarities to the moon

Speculation about water ice on Mercury dates back more than 20 years.

In 1991, Earth-bound astronomers fired radar signals to Mercury and received results showing there could be ice at both poles. This was reinforced by 1999 measurements using the more powerful Arecibo Observatorymicrowave beam in Puerto Rico. Radar pictures beamed back to New Mexico's Very Large Array showed white areas that researchers suspected was water ice.

A closer view, however, required a spacecraft. Messenger settled into Mercury's orbit in March 2011, after a few flybys.  Almost immediately, NASA used a laser altimeter to probe the poles. The laser is weak — about the strength of a flashlight — but just powerful enough to distinguish bright icy areas from the darker, surrounding Mercury regolith.

Neumann said the result was "curious": There were few bright spots inside craters.

Team member John Cavanaugh was pretty sure of what they were finding, Neumann recalled. Cavanaugh had been a part of NASA's Lunar Reconnaissance Orbiter team, and he had seen a similar strange pattern on Earth's moon when LRO found ice at the lunar poles in 2009.

Flash heating on Mercury would mix nearly all of its ice with the surrounding regolith – as well as with possible organic material borne to the planet by comets and ice-rich asteroids.

"So what you're seeing is the fact that water ice can't survive indefinitely in these locations because the temperatures apparently spike up," Neumann said.

The team expected to find water ice on Mercury. Indeed, Messenger already drew a linkthis year between permanently shadowed areas on the planet and the "radar bright" spots seen from Earth.

All researchers needed to do was point their instruments in the right spot, seek out bright areas and then measure the temperature and composition.

Messenger's neutron spectrometer spotted hydrogen, which is a large component of water ice. But the temperature profile unexpectedly showed that dark, volatile materials – consistent with climes in which organics survive – are mixing in with the ice.

"This was very exciting. You are looking for bright stuff, and you see dark stuff – gee, it’s something new," Neumann said.

Organic materials are life's ingredients, though they do not necessarily lead to life itself. While some scientists think organics-bearing comets sparkedlife on Earth, the presence of organics is also suspected on airless, distant worlds such as Pluto. Scientists say comets carrying organic bits smashed into other planets frequently during the solar system's history.

Researchers are now working to determine if they indeed saw organics on Mercury. So far, they suspect Mercury's water ice is coated with a 4-inch (10 centimeters) blanket of "thermally insulating material," according to Neumann's paper.

It will take further study to figure out exactly what this material is, but Neumann said the early temperature curves could show organic materials such as amino acids.