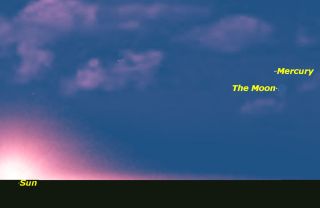 The closest planet to the sun, Mercury takes the least time to orbit the giant star. Its close proximity boosts the world's temperature, and makes it difficult to hold on to its atmosphere. But just how close is close?

Mercury boasts an orbit that is the most elliptical of all of the planets, stretched out from a perfect circle. When it is closest to the sun, it is only 29 million miles (47 million km), but at its farthest, the distance to Mercury is 43 million miles (70 million km). (Pluto's orbit is even more eccentric, but Mercury holds the "most elliptical planetary orbit" since the far-flung body was downgraded to a dwarf planet; Pluto's downgrade also made Mercury the smallest of the eight remaining planets.)

This bizarre orbit confused early astronomers as they tried to piece together how the solar system worked. When Mercury is at its farthest from the sun, it is traveling the slowest. This gives Earth time to catch up to it about once every three and a half months. Astronomers charting the motion of Mercury across the sky would see it moving backward over the course of several nights in relation to other stars in the sky. It wasn't until Nicolaus Copernicus established that planets traveled around the sun rather than around the Earth that the matter was cleared up.

Ironically, although Mercury is the closest planet to the sun, it is not the hottest; Venus boasts that honor. Mercury has wildly swinging temperatures, but only at thin atmosphere to trap heat on the planet, while the atmosphere of Venus creates a runaway greenhouse effect that elevates its temperature higher than Mercury.

Because Mercury is so close to the sun, the Hubble Space Telescope, which has captured images of a number of bodies in the solar system, cannot photograph the planet's rocky surface.

Mercury and the sun

Like Venus, Mercury also undergoes transits, passing between the Earth and the sun about 13 times each century. But the inclination of Mercury's orbit is such that a transit does not occur every time the two planets pass. Mercury only crosses the sun once every seven years. Astronomers used transits to help calculate the distance to Earth from the sun. (Venus' transits are significantly more rare, occurring only once every 243 years.)

During the 2016 transit, three spacecraft observed the display.

"It used to be hard to observe transits. If you were in a place that had bad weather, for example, you missed your chance and had to wait for the next one," Joseph Gurman said in a statement. Gurman is project scientist for NASA's Solar and Heliospheric Observatory (SOHO) project scientist, one of the instruments. NASA's Solar Dynamics Observatory and the Japanese Aerospace Exploration Agency-led Hinode solar mission also captured Mercury crossing the sun.

"These instruments help us make our observations, despite any earthly obstacles," Gurman said.

How far is Mercury from Earth?

The constant motions of planets around the sun means that the distance between Earth and Mercury is in constant flux. When both planets are on opposite sides of the sun, they can achieve their maximum distance of 137 million miles (222 million kilometers). When they are at their closest, they are only 48 million miles (77.3 million km) apart.

How long does it take to reach Mercury?

Mercury isn't that far away, as far as planets go. But only a few spacecraft have traveled to it. Traveling to a planet isn't like driving across the country. Improvements in propulsion aren't the most important determining factor in terms of how long the voyage will take. Space agencies often use gravitational boosts from other planets to gain speed without a high fuel cost. And unlike a road trip, the beginning and end point of solar system journeys are constantly changing position, sometimes ideally lined up but other times not.

Launched on November 3, 1973, NASA's Mariner 10 slingshotted around Venus to reach Mercury. It performed its first of three flybys on March 29, 1974, taking just over four months to reach the planet. Mariner 10 was both the first spacecraft to travel to multiple planets and the first one to receive a gravitational boost.

The hot rocky body remained unvisited for over thirty years. On August 3, 2004, NASA launched the Mercury Surface, Space Environment, Geochemistry, and Ranging (MESSENGER) mission to the planet. MESSENGER performed a flyby of Earth and two of Venus before reaching Mercury on January 14, 2008, a voyage of nearly three and a half years.

The European Space Agency and the Japan Aerospace Agency plan to send a joint mission to Mercury known as BepiColombo. Scheduled to launch in 2018, the craft will flyby Earth once and Venus twice to arrive at Mercury in late 2024, having traveled in space for nearly six and a half years.