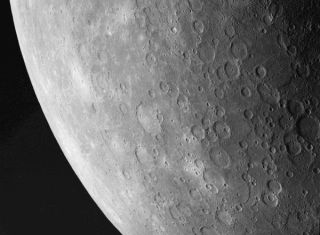 Mariner 10 took this photo of the southwest region of Mercury.
(Image: © NASA)

Of all the planets in the solar system, Mercury has the thinnest atmosphere, thinner than even Mars. Several components are constantly replenished by the solar wind blowing off of the nearby sun.

Mercury is the smallest and least massive of the eight planets. Its low surface gravity makes holding on to an atmosphere in the best of circumstances a challenge.

But Mercury isn't ideally located for an atmosphere. Orbiting only a few million miles from the sun, the rocky planet is constantly bombarded by solar weather. The fast-moving winds blowing off the star constantly bombard Mercury, crashing charged particles into the planet's surface. Both the particles themselves and the heat they produce kick material up from the outer layer of the planet, sending it flying into the air. The heaviest atoms drift back to the surface, while the lightest are affected by gravity and by pressure from solar photons. The result is a tenuous atmosphere known as an exosphere.

In the past, scientists had to rely on brief glimpses captured by NASA's Mariner 10 spacecraft and Earth-based instruments studied the world's features as it crossed in front of the sun. Once NASA's MErcury Surface Space ENvironment, GEochemistry, and Ranging (MESSENGER) mission entered orbit around the planet, however, it could provide a more comprehensive look that helped clear up incorrect estimates made by earlier snapshots.

"We think they gave a generous upper limit," Killen said.

The atmosphere is filled instead with sodium, magnesium, and calcium, which are spread across the planet. Traces of hydrogen, helium, and potassium were also detected. Before the newest spacecraft arrived, scientists thought that solar radiation carried material kicked up on the sun-lit side by solar wind and radiation over to the night side, a process known as ion sputtering. According to MESSENGER co-investigator William McClintock, a senior scientist at the University of Colorado, Boulder, MESSENGER's observations reveal a variety of interactions affecting the movement of the atoms.

"They show that distinctly different source and loss processes control the populations of the major constituents," McClintock said in a statement.

The main factor instead appears to be photon-stimulated desorption (PSD), a where photons release sodium.

According to Killen's research, sodium, calcium, and magnesium are each released by different processes and more likely to collide with the planet's surface than with each other.

The planet's weak magnetic field helps to funnel the material from the day to night side, but is not strong enough to explain the distributions observed. While Earth's magnetic field shields the planet from many of the sun's charged particles, the field surrounding Mercury is too weak.

"We had previously observed neutral sodium from ground observations, but up close we've discovered that charged sodium particles are concentrated near Mercury's polar regions where they are likely liberated by solar wind ion sputtering, effectively knocking sodium atoms off Mercury's surface," Thomas Zurbuchen of the University of Michigan said in a statement. Zurbuchen is the project leader for MESSENGER's Fast Imaging Plasma Spectrometer instrument, which made the first global measurements of Mercury's exosphere and magnetosphere.

"Our results tell us that Mercury's weak magnetosphere provides very little protection of the planet from the solar wind," Zurbuchen said.

While some of the particles kicked up by the sun fall back onto the planet, some of it drifts away, forming a comet-like tail behind the planet. MESSENGER studied the 1.2-million-mile (2-million-kilometer) long tail trailing behind the rocky world. Sodium and calcium populate the material. According to the MESSENGER team, most of the neutral atoms that make their way into the tail manage to escape the planet.

"The radiation acceleration is the strongest when Mercury is at a middle distance from the sun," said Matthew Burger, now at Morgan State University in Maryland, said in a statement. Burger's models revealed the prevalence of PSD in creating the planet's tail.

"That's because Mercury is traveling fastest at that point in its orbits, and this is one of the factors that determines how much pressure the sun's radiation exerts on the exosphere," Burger said.

Speaking of comets, the wandering chunks of ice also affect the planet's atmosphere. In a separate study, Burger and his colleagues found a pattern for calcium that repeated over Mercury's short orbit. Killen and colleagues then worked to figure out what happened when Mercury plowed through the cloud of debris known as zodiacal dust that surrounds the sun. Most of the calcium could be explained by the cloud, but the team found that Comet Encke's short 3.3-year orbit could explain a mysterious calcium feature.

"We already knew that impacts were important in producing exospheres," Killen said in a statement.

"What we did not know was the relative importance of comet streams over zodiacal dust. Apparently, comet streams can have a huge, but periodic, effect."

With virtually no atmosphere, Mercury feels very little in terms of traditional weather. It does feel the presence of solar weather, with the constant ebb and flow of the solar wind bombarding its surface.

The lack of atmosphere also contributes to the planet's wild temperature extremes. On other planets, the atmosphere functions as a blanket, helping to redistribute heat somewhat. But on Mercury, the thin atmosphere does nothing to stabilize the incoming solar rays—and because the distance to Mercury from the sun is so small, the day side of the planet feels the heat keenly, while the night side, turned from the sun, only registers the cold. Mercury's lack of atmosphere means that it is not the hottest planet; Venus, with its runaway global warming, has that honor.

The temperature of Mercury varies from day to night, but the planet only changes slight during its seasons. The planet stands essentially straight up and down in relation to its orbit, with no tilt to put one hemisphere closer than the other. That allows the world closest to the sun to host ice within its polar craters.

However, the planet does boast the most eccentric orbit of all the other planets (Pluto's orbit is more eccentric, but alas, it is only a dwarf planet). As such, Mercury does experience some temperature variations over the course of its short year.