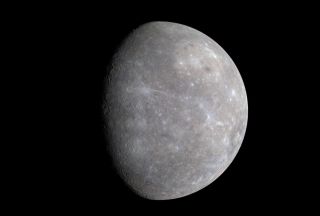 Mercury's extreme temperatures and lack of an atmosphere would make it very difficult, if not impossible, for people to live on the planet.
(Image: © NASA/Johns Hopkins University Applied Physics Laboratory/Carnegie Institution of Washington)

With its extreme temperature fluctuations, Mercury is not likely a planet that humans would ever want to colonize. But if we had the technology to survive on the planet closest to the sun, what would it be like to live there?

To date, only two spacecraft have visited Mercury. The first, Mariner 10, conducted a series of Mercury flybys in 1974, but the spacecraft only saw the lit half of the planet. NASA's MESSENGER spacecraft, on the other hand, conducted flybys and then entered Mercury's orbit — in March of 2013, images from the spacecraft allowed scientists to completely map the planet for the first time. [Living on Mercury Would Be Hard (Infographic)]

MESSENGER photos of Mercury show that the planet has water ice at its poles, which sit in permanent darkness. Mining this ice would be a good way to live off the land, but setting up bases at the poles might not be a good idea, said David Blewett, a participating scientist with the Messenger program.

"The polar regions would give you some respite from the strength of the sun on Mercury," Blewett told Space.com. "But, of course, it's really cold in those permanently shadowed areas where the ice is, and that presents its own challenge."

A better option, he said, would probably be to set up a home base not far from one of the ice caps, perhaps on a crater rim, and have a water mining operation at the pole.

Scientists once believed Mercury was tidally locked with the sun, meaning that one side of the planet always faces the sun because it takes the same amount of time to rotate around its axis as it does to revolve around the star. But we now know that Mercury's day lasts almost 59 Earth days and its year stretches for about 88 Earth days.

Interestingly, the sun has an odd path through the planet's sky over the course of Mercury's long day, because of the interaction between Mercury's spin rate and its highly elliptical orbit around the sun.

"It [the sun] rises in the east and moves across the sky, and then it pauses and moves backwards just a tad. It then resumes its motion towards the west and sunset," said Blewett, adding that the sun appears 2.5 times larger in Mercury's sky than it does in Earth's sky.

And during the day, Mercury's sky would appear black, not blue, because the planet has virtually no atmosphere to scatter the sun's light. "Here on Earth at sea level, the molecules of air are colliding billions of times per second," Blewett said. "But on Mercury, the atmosphere, or 'exosphere,' is so very rarefied that the atoms essentially never collide with other exosphere atoms." This lack of atmosphere also means that the stars wouldn't twinkle at night.

But Mercury isn't devoid of natural disasters. "The surface is exposed to impacts of all sizes," Blewett said. It also may suffer from earthquakes due to compressive forces that are shrinking the planet (unlike Earth, Mercury doesn't have tectonic activity).

Mercury is about two-fifths the size of Earth, with a similar gravity to Mars, or about 38 percent of Earth's gravity. This means that you could jump three times as high on Mercury, and heavy objects would be easier to pick up, Blewett said. However, everything would still have the same mass and inertia, so you could be knocked over if someone threw a heavy object at you, he added.

Finally, you can forget about a smooth Skype call home: It takes at least 5 minutes for signals from Mercury to reach Earth, and vice versa.