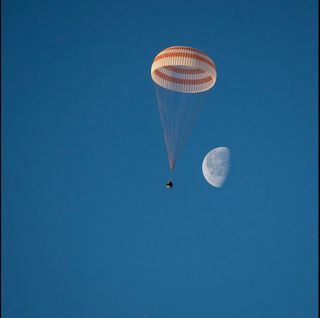 The half-moon is captured behind a Soyuz spacecraft returning three crewmembers to Earth from the International Space Station on March 11, 2014.
(Image: © Bill Ingalls)

In one of the photos, a half-moon hovers behind the Russian Soyuz capsule carrying NASA astronaut Barry "Butch" Wilmore and Russian cosmonauts Alexander Samokutyaev and Elena Serova. A second photo shows the sun backlighting both the Soyuz and the clouds as the spacecraft gently descends under a parachute towards its landing site in Kazakhstan.

Landing was challenging under these conditions, as fog made it difficult for the recovery crews to arrive at the spacecraft. Besides some communications fadeouts, however, the landing was successful and the crew arrived safely back on Earth at about 8:07 a.m. local time March 12, (10:07 p.m. March 11 EDT).

The shots were taken by NASA photographer Bill Ingalls, who regularly journeys to Kazakhstan to capture crew landings.

Meanwhile, the orbiting outpost is undergoing several upgrades to prepare it for the arrival of these commercial spacecraft. The preparation began in earnest this year with three spacewalks to install docking adapters for the commercial Boeing CST-100 and SpaceX Dragon spacecraft. Wilmore participated in all three of the excursions outside the station.

Crews have been on board the space station continually since 2000, and construction began in 1998. The first one-year crew will blast off to the station later this month when cosmonaut Mikhail Kornienko and NASA astronaut Scott Kelly, as well as cosmonaut Gennady Padalka, rocket to space from Kazakhstan on March 27.