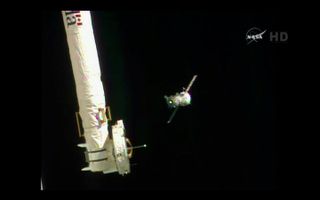 Three International Space Station crewmembers — including one NASA astronaut — are on their way back to Earth today (March 11) after a nearly six-month stint aboard the orbiting outpost.

NASA's Barry "Butch" Wilmore and cosmonauts Alexander Samokutyaev and Elena Serova are expected to land on the steppes of Kazakhstan in Central Asia at 10:07 p.m. EDT (0207 March 12 GMT). The trio's Russian Soyuz spacecraft undocked from the space station at 6:44 p.m. EDT (2244 GMT), marking the start of their journey back to Earth. You can watch NASA TV coverage of the crew's landing starting at 9 p.m. EDT (0100 March 12 GMT) on Space.com.

Wilmore served as the space station's commander during the Expedition 42 phase of his mission; he passed the commander baton to NASA's Terry Virts in a ceremony Tuesday (March 10). Virts, cosmonaut Anton Shkaplerov and European Space Agency astronaut Samantha Cristoforetti are staying on the station to serve out the remainder of their mission before heading home later this year.

"It's been a great expedition together," Virts remarked as he said goodbye to Wilmore, Samokutyaev and Serova. "We're wishing them safe landings, and an adventure on the way home to end the great six-month adventure that you've had here in space, and we'll see you on Earth in a few months."

Virts, Shkaplerov and Cristoforetti won't be alone on the orbiting outpost for long. Cosmonauts Mikhail Kornienko, Gennady Padalka and NASA's Scott Kelly are set to fly up to the space station on March 27 to begin their mission. Kelly and Kornienko are scheduled to remain aboard the space laboratory for 12 months as part of the first yearlong mission to the International Space Station.

At the moment, NASA needs to rely on Russia's Soyuz spacecraft to ferry its astronauts to and from the space station, but space agency officials hope to change that in the next couple of years. NASA is planning to buy seats aboard private spacecraft developed by Boeing and SpaceX, which could be operational by 2017.