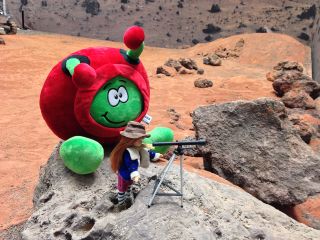 Calling all young astronomers and creative writers! The European Space Agency is asking for kids 12 and under to submit their most fantastic stories inspired by the stars for a chance to win a Stargazer Lottie doll.

The "Star Competition" is now accepting submissions, which are due no later than March 31. The stories can be about anything, as long as they're somehow linked to the stars. Ten winners will receive a Stargazer Lottie doll, and the top three winners will have their stories posted online.

Stargazer Lottie is one of Space.com's favorite new space-themed toys because she's full of real space science: she comes with her own telescope, solar system trading cards and a list of famous female astronomers. We think it's a perfect prize for the winner of the story contest.[Astronomy Guide: Tools, Tips and Equipment]

The European Space Agency (ESA) stated on the contest website that the stories can be written in any language, "So don't worry if English isn't your first language!

"Your story can be about anything as long as you link it to the stars," the ESA statement said. "You could ponder why stars, when observed closely with a telescope, have different colors, or tell us if you think stars all have the same size. You could even write about a hardy species of alien that can survive on the scorching surface of a star!"

Completed stories should be emailed to kids@esa.int.

Stargazer Lottie is produced by Arklu Ltd., and belongs to the Lottie family of dolls, which includes a Pirate Queen Lottie, Kawaii Karate Lottie, Robot Girl Lottie and the new Fossil Hunter Lottie. The Stargazer doll won the Little Astronomers category in this year's Space.com Space Age Awards, which highlights some of the best new space-themed toys available. The doll is set to be released later this month.

For the Stargazer doll, the designers consulted with Karen Masters, a senior lecturer in astronomy at the University of Portsmouth in the United Kingdom, "to ensure that the astronomy details on [the] packaging were correct," said Lucy Follett, co-founder of Lottie dolls and creative director at Arklu Ltd. The Special Edition "Gold Collection" Stargazer Lottie doll is being released in collaboration with the European Space Agency.

The telescope that comes with Stargazer Lottie is based on the Galileoscope, a low-cost telescope that can be assembled without adhesives or tools, with the goal of supporting science education worldwide, according to the project website. Follett said the company has also created expanded biographies of the female astronomers who appear on the paper sheet that comes with the doll.

The company also consulted with working scientists on the Robot Girl Lottie doll and the new Fossil Hunter Lottie doll.

Be sure to let the little scientist in your life know about the essay contest.