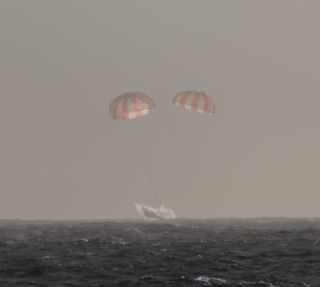 SpaceX's robotic Dragon capsule has come back to Earth, wrapping up a successful monthlong cargo mission to the International Space Station.

SpaceX launched the Dragon capsule toward the space station on Jan. 10, using its own Falcon 9 rocket to loft the spacecraft. Two days later, Dragon delivered more than 5,000 lbs. (2,268 kilograms) of food, scientific experiments, spare parts and other cargo to the station. The capsule brought 3,700 lbs. (1,678 kg) of scientific supplies and other "down cargo" back to Earth Tuesday, NASA officials said. (Dragon is the only robotic spacecraft operating today that can return supplies to Earth; other vehicles are designed to burn up in the atmosphere.)

California-based SpaceX holds a $1.6 billion contract with NASA to fly 12 cargo missions to the space station using Dragon and the Falcon 9. The company has now completed five of these flights, all of them successful.

Another aerospace firm, Virginia-based Orbital ATK, secured a $1.9 billion deal to make eight resupply flights to the station for NASA using its Cygnus capsule and Antares rocket. The first two missions went well, but the third, in late October 2014, ended just seconds after liftoff when the Antares exploded.

Dragon's splashdown was supposed to be part of an extremely busy day for SpaceX. The company planned to launch the Deep Space Climate Observatory (DSCOVR) space-weather satellite using a Falcon 9 from Florida's Cape Canaveral Air Force Station Tuesday — and also attempt to bring the rocket's first stage back for a soft landing on a robotic ship in the Atlantic Ocean, in a test of reusable-rocket technology.

SpaceX has tried the ocean-landing maneuver once before, during Dragon's Jan. 10 launch. The bold move nearly worked — the Falcon 9 stage hit its drone ship target but came down too hard and exploded on the deck.