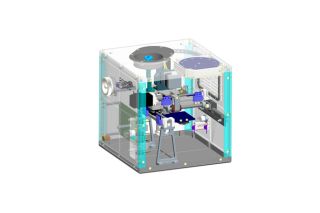 A schematic of the Portable On-Board 3D Printer, a small 3D printer headed for the International Space Station in 2015 for the European Space Agency.
(Image: © Altran)

Europe is set to send its first 3D printer into the final frontier this year to experiment with zero-gravity manufacturing on long space voyages.

The European Space Agency plans to deliver its new Portable On-Board 3D Printer (POP3D for short) to the International Space Station by the end of June, making it the second 3D printer in space. The diminutive 3D printer is a cube that measures just under 10 inches (25 centimeters) per side and requires a small amount of power to operate.

In order to ensure the printer does not affect the space crew's environment, Altran designed the machine to use a heat-based printing method and a harmless, biodegradable plastic.

The printer will be tested by Italian astronaut Samantha Cristoforetti of ESA as part of her Futura mission on the International Space Station. She is one of six crewmembers currently living on the orbiting lab.

Last September, the California-based company Made In Space sent a 3D printer to the space station as part of a NASA experiment. That machine has already printed parts for itself and printed a working ratchet tool from a design beamed into space from Earth.

Made In Space's 3D-printed objects, as well as anything POP3D produces, will eventually be returned to Earth and compared with identical items made with 3D printers on the ground. The comparison should help scientists determine whether 3D printed objects made in space work as well as they do on Earth.

If the innovative approach to space manufacturing works, its implications could be vast for future space exploration, ESA and NASA scientists have said. The concept for Pop3D was unveiled last October during a conference attended by 350 3D printing experts from across Europe

The technology could allow astronauts to print delicate tools in space that could not otherwise survive the stresses of launching into space, Altran representatives explained.It could also reduce the need to pack spare parts on resupply missions, as well as lower total number of parts needed both on a spacecraft or the space station, therefore lowering the overall cost of spaceflight.

"In the case of a complex injector of a rocket engine, we are able to take the total number of parts needed from around 250 down to one or two," one space 3D-printing advocate Steffen Beyer, head of Materials and Process Technology at Airbus Defence and Space, said in the ESA statement. "That represents a revolution in design and manufacturing."