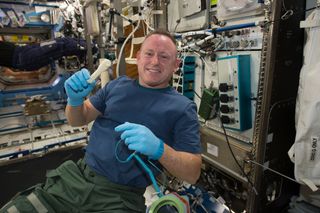 International Space Station Commander Barry "Butch" Wilmore shows off a ratchet wrench made with a 3D printer aboard the orbiting lab. The wrench and other parts will return to Earth for comparison with ground samples in early 2015.
(Image: © NASA)

The 3D printer aboard the International Space Station has wrapped up the first phase of its orbital test run by cranking out a ratchet wrench whose design was beamed up from Earth.

The wrench, along with the 19 other objects built by the orbiting 3D printer thus far, will travel to Earth early next year, where engineers will compare the objects with ground samples produced by the same machine before it launched, NASA officials said.

"We can't wait to get these objects home and put them through structural and mechanical testing," Quincy Bean, of NASA's Marshall Space Flight Center in Huntsville, Alabama, said in a statement. "We really won't know how well this process worked in space until we inspect the parts and complete these tests." [10 Ways 3D Printing Could Transform Space Travel]

The 3D printer arrived on the space station in September as part of the 3D Print project, a collaboration between NASA and the California-based startup Made in Space, which designed and built the machine. The printer was installed in the station's Microgravity Science Glovebox on Nov. 17, then printed out its first part — a piece for the printer itself called an extruder plate — a week later.

All the other parts made by the printer during its first month of operations came from designs installed on the machine before its launch. So sending the wrench's file up from Earth marked another milestone, NASA officials said.

"For the printer's final test in this phase of operations, NASA wanted to validate the process for printing on demand, which will be critical on longer journeys to Mars," 3D Print program manager Niki Werkheiser, also of NASA Marshall, said in the same statement. "In less than a week, the ratchet was designed, approved by safety and other NASA reviewers, and the file was sent to space where the printer made the wrench in four hours."

NASA has high hopes for 3D printing, saying in-space manufacturing technology could bring down the cost of spaceflight significantly and make voyaging spacecraft more self-sufficient. (Carrying a printer and some raw "feedstock" material would be easier and cheaper than lugging a huge cache of spare parts, the thinking goes.)

The 3D Print project is one step toward this ambitious goal. And the machine's work aboard the space station isn't done yet; phase two should start early next year.

"For our next phase of operations, we are working with the astronaut office to identify existing tools that we can make with the printer," Werkheiser said. "We can't wait until it is routine to see station astronauts use tools that they built in space."