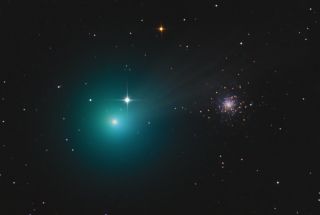 Two heavenly sights are shining in the night sky for stargazers this month: Eridanus, the long, winding Heavenly River constellation, and Comet Lovejoy, the bright green comet that is now streaking through the star pattern

Located due south around 8 p.m. your local time this week, Eridanus, is actually fun to trace out. Begin at Orion, where the star Cursa is located to the north and west (upper right) of the brilliant blue star Rigel in Orion.

After passing two stars to the west note the close pair of stars, which have the catchy names Beid and Keid (words derived from the Arabic for egg and eggshell, respectively.) At Zaurak begins a reverse curve, then four stars extend directly to the west. Among these is Epsilon Eridani, one of our closest stellar neighbors at a mere 10.7 light-years away. To the ancients, the River ended at Acamar, but in reality, it is the bluish first magnitude star Achernar that glows at the end of the river. It’s the ninth brightest star in the sky, yet positioned so far south that only those who live near or along the Gulf Coast get a glimpse of it. [How to Spot Comet Lovejoy in Eridanus: A Guide]

Currently passing through the boundaries of Eridanus is a celestial interloper, Comet Lovejoy.

The comet, discovered last August by Australian amateur astronomer Terry Lovejoy (his fifth comet to date), is putting on a  show for those equipped with little more than good binoculars or a small telescope. Officially catalogued as C/2014 Q2, this object is now reaching the pinnacle of its brightness; it will be making its closest approach to Earth tonight (Jan. 7) at a distance of 43.6 million miles (70.2 million km).

Until now, the bright early winter moon has been a real nuisance, lighting up the sky and hindering comet observations.  Nonetheless, the comet has held its own in the  moonlight. On Jan. 3, Lovejoy was shining at magnitude 4.6, a bit brighter than Eta Ursae Minoris, the faintest of the four stars in the bowl of the Little Dipper. [Amazing Photos of Comet Lovejoy]

As such, the comet is now dimly visible to the unaided eye. The coma, or head of the comet, appears 18 arc minutes wide, or three-fifths the apparent diameter of the moon, corresponding to 238,600 miles (383,900 km).

Alan MacRobert, senior editor of Sky & Telescope magazine, says that before the bright moon became too objectionable, his 10x50 binoculars revealed Lovejoy to be a "biggish puffball, moderately concentrated toward its center." He was also able to perceive the comet's greenish tint. "And this was through moderate suburban light pollution."

There is no question that the comet would have appeared much more impressive were it not for the moon.

Now that moon is moving out of the evening sky (tonight it will rise about an hour after the end of astronomical twilight), there will be about an hour of dark sky to view Comet Lovejoy with no interference from moonlight. Each night that follows, moonrise will occur about an hour later than the previous night, meaning progressively longer intervals of darkness while the comet will continue to climb higher and closer toward a better position for early evening viewing.

And Comet Lovejoy continues to run well ahead of even the most optimistic brightness forecasts.

German amateur astronomer Andreas Kammerer has been analyzing the evolution of Comet Lovejoy ever since its discovery and has been struck by how well it has performed. The best, Kammerer predicts, is yet to come.

"It is very astonishing that this comet shows a very steady increase with such a great activity parameter over many weeks," Kammerer explained. "If it should continue this evolution it will reach magnitude 4.0 in mid-January, with the coma measuring about 25 arc minutes."

Noted comet expert John Bortle agrees: "This has to be the object with the most extreme photometric parameters I've ever observed when it comes to an intrinsically large comet. If only C/2014 Q2 approached much closer to the sun it might well have become the most brilliant comet in all of history!"

Alas, Lovejoy will remain beyond the orbit of Earth, coming no closer than 119.9 million miles (193 million km) from the sun on Jan. 30.

Comet's track for the rest of January

After passing through the Eridanus constellation, Comet Lovejoy will cross over into Taurus the Bull by Friday (Jan. 9). The comet currently is racing against the background stars at about 3 degrees per day, so even a few minutes of watching with a telescope should reveal its shift relative to background field stars.

'The comet will then begin to slow in its course across the sky, reaching Aries the Ram by Jan. 17 and finally skirting the boundary of Perseus the Hero and Triangulum the Triangle during the final week of January. By then it will likely have faded to around 5th magnitude, but still should make for an interesting object in both binoculars and small telescopes.

Editor's note: Have you captured an amazing photo of Comet Lovejoy? If so, let us know. You can send us any comet photos or night sky views for a possible story or gallery by submitting images and comments to managing editor Tariq Malik at: spacephotos@space.com.