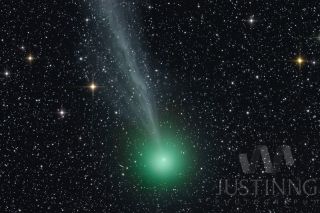 A newfound comet is turning into a cosmic treat for the New Year as it brightens into a spectacular night sky object as seen in this amazing photo by a Singapore-based astrophotographer.

This image of the newly discovered Comet Lovejoy, was captured by veteran night sky photographer Justin Ng on Dec. 29 from Singapore. Officially cataloged as C/2014 Q2, the comet is named after its discoverer Terry Lovejoy of Queensland, Australia. The comet will make its closest approach to Earth (about 43.6 million miles or 70.2 million kilometers) on Wednesday, Jan. 7.

Weather permitting, Comet Lovejoy should be easily visible to observers with binoculars or a telescope this week as it passes through left side of the constellation Eridanus in the southwestern sky. See the sky map in this guide for the comet's location at 12 a.m. EST (0500 GMT) on Tuesday, Jan. 6. [How to See Comet Lovejoy This Week]

In Ng's amazing image of Comet Lovejoy, the gorgeous green glow of the comet and a wispy, narrow appendage can be seen. The greenish hue is likely due to the presence of cyanogen and diatomic carbon, which glow green when illuminated by sunlight. Spiral galaxy, NGC1886, is also visible located on the left of the coma.

Terry Lovejoy, a prolific comet discoverer with many objects named for him, first spotted the new Comet Lovejoy in August of 2014. Since then, it has brightened into a dazzling target for amateur astronomers. At it reaches peak brightness this week, it may even be visible to the unaided eye for observers in extremely dark skies well away from city lights, according to some forecasts.

The comet has been getting brighter as it moves across the sky. Beginning as a faint glow about 4,000 times dimmer than the faintest star visible to the unaided eye. The comet has been getting brighter at a rapid pace and on Dec. 26, reached a magnitude +5.3 on the reverse scale used by astronomers to measure the brightness of objects in space. On this scale, smaller numbers represent brighter objects. The dimmest objects visible to the human eye are about magnitude 6.5.

On Tuesday, Jan. 6, at 2 p.m. EST (1900 GMT), the online Virtual Telescope Project in Italy will offer live telescope views of Comet Lovejoy during a free webcast. Another webcast of the comet is slated for Jan. 11.

As Comet Lovejoy moves away from both the sun and Earth, it should fade rapidly. Its next scheduled appearance through our solar neighborhood is due around the year 10,000.

Editor's note: If you capture a striking view of Comet Lovejoy, or any other night sky photo that you'd like to share for a possible story or image gallery, send images and comments in to managing editor Tariq Malik at spacephotos@space.com.