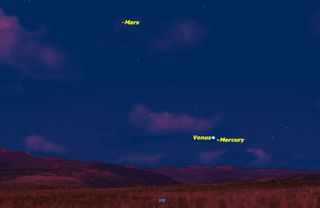 Look to the skies during January to see a number of awesome celestial events. Venus will be particularly impressive this month, and Mercury will be easy to spot in evening twilight.
(Image: © Starry Night software)

The start of 2015 brings a new year of planet hunting for amateur astronomers around the world, and plenty of dazzling views of the planets await in January for the stargazer who knows where and when to look.

Brilliant Venus will readily guide observers to Mercury in the January night sky. At magnitude minus 0.8 on New Year's Day, Mercury should be easily visible 3 degrees to the lower right of Venus and sets one hour after the sun. (Your closed fist held out at arm's length covers about 10 degrees of the night sky). By Jan. 10, this interval will have become 90 minutes, with Mercury and Venus separated by less than two-thirds of a degree.

But this month's Venus-Mercury pairing is not mentioned in the list of planetary configurations in the US Naval Observatory;s Astronomical Almanac or the Royal Astronomical Society of Canada's Observer's Handbook. Both include all conjunctions of planets that occur at least 10 degrees from the sun. (As defined in these publications, a conjunction occurs when two objects have the same right ascension in the sky.) [Best Night Sky Events in January 2015 (Sky Maps)]

As noted below, when two bright planets come within 5 degrees without an actual conjunction in right ascension the event is called a "quasi-conjunction." The last such happening was an eye-catching Venus-Jupiter pairing in the morning sky in July 2012. According to Jean Meeus the next two quasi-conjunctions will occur in 2016: Mercury and Venus, least separation 4 degrees on Feb. 13; Mercury and Jupiter, 3.8 degrees on Aug. 20.

But this month's event easily tops those two in observational interest. For 10 dates (Jan. 6-15) Mercury and Venus will be separated by less than 2 degrees, and for five of those nights (Jan. 8-12) the two planets will be less than 1 degrees apart. [Related: Must-See Night Sky Events of 2015]

Below, we present a schedule that provides some of the best planet-viewing times as well as where to look to see them:

Jan. 7: This evening, look low toward the east-northeast horizon around 8 p.m. for the waning gibbous moon and about 6 degrees to its left you'll see Jupiter. Now nearing its Feb. 6 opposition, the solar system’s biggest planet rises in early evening during January — about 90 minutes after twilight's end on New Year's Day, and in bright twilight by late in the month. Jupiter is big and bright, blazing at magnitude minus 2.5 and not far from the Sickle of Leo. It's high enough for superb telescopic views by late evening, but many details may already be visible on its busy face before then.

Jan. 10: The well-known astronomer Jean Meeus of Belgium defines a "quasi-conjunction" as an approach of two bright planets within 5 degrees of each other, without an actual conjunction in right ascension. Such will be the case between Venus and Mercury. During the first 19 days of January these two planets will be less than 5 degrees from each other. On New Year's Day, Mercury will be positioned 3 degrees below and to the right of Venus. In the days that follow, it will appear to slowly creep up toward Venus. They will appear closest together this evening, separated by just 0.65 degrees.

Mercury will be shining at a very bright magnitude of minus 0.8; among the stars only Sirius is brighter. And yet, dazzling Venus outshines Mercury by more than 17 fold. The two planets will then gradually separate in the nights that follow, with Mercury slowly moving away to Venus's right.

Jan. 14: Mercury reaches greatest elongation, 19 degrees east of the sun. Still shining at a very bright magnitude of minus 0.6, the planet will fade rapidly in the days ahead and is not likely to be seen after the Jan. 23. Inferior conjunction occurs on the Jan. 30.

Jan. 19: Mars will provide a great opportunity for you to sight the outermost planet, Neptune. This evening the red planet will pass just 0.2 degrees to the south of bluish Neptune. Good binoculars or a small telescope should be able to pick up 8th magnitude Neptune, less than half a full moon's width from Mars.

Jan. 21: About 45 minutes after sunset, look low in the southwest sky for Venus and then look about 6 degrees to its right for a hairline crescent moon, less than 36 hours past new phase. Venus is actually less bright than usual, but it still vastly outshines all other points of light in the heavens. Because of its relatively low altitude in the sky, the planet's appearance in a telescope isn't so good — it remains a shaky, tiny, just barely out-of-round dot of dazzling light that is blurry due to atmospheric turbulence. But Venus's altitude and telescopic appearance will improve greatly in the coming months. And 4 degrees directly below the moon you'll also find our old friend Mercury, having faded to magnitude 0.6.

Editor's note: If you snap an amazing photo of the planets in January's night sky, or any other night sky view, and you'd like to share it with Space.com, send comments and images in to managing editor Tariq Malik at spacephotos@space.com.