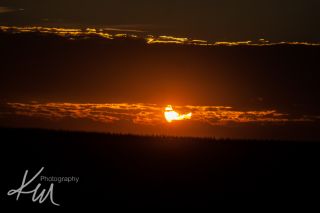 Look to the skies in 2015 to see total eclipses, amazing planets and meteor showers.

Here are some of the most noteworthy skywatching events coming next year. Space.com will provide more extensive coverage of most of these events as they draw closer.

Total eclipse of the sun: March 20

The dark shadow of the moon will trace a curved path primarily over the North Atlantic and Arctic oceans, beginning off the southern tip of Greenland and then winding its way counterclockwise to the northeast passing between Iceland and the United Kingdom. [101 Stargazer Photos from 2014]

The shadow will pass over the Faeroe Islands, the sparsely inhabited Norwegian island group of Svalbard, and then hook counterclockwise toward the northwest where it leaves the Earth's surface very close to the North Pole. The point of greatest eclipse occurs north of the Faeroes, in the Norwegian Sea. The town of Barentsburg, on Spitsbergen (one of the principal islands of Svalbard), will witness 2 minutes, 30 seconds of total eclipse.

Total eclipse of the moon: April 4

This lunar eclipse  is unusual because the entire disk of the moon will just barely squeeze inside the umbra (the dark shadow of the Earth) making for a mere 9 minutes of totality – the shortest duration since Oct. 13, 1856.

To see this eclipse well you will need to be positioned in a city alongthe edge of the Pacific Ocean. Across much of the United States and Canada, this eclipse will coincide with moonset; the farther west you go the more of this eclipse you will see. In the Atlantic, perhaps the faint smudge of the penumbral shadow will be visible before moonset. In the Eastern time zone, the darker umbral shadow will create the appearance of a "bite" on the moon’s upper left edge. For those in the central part of the United States, a sizable amount of the moon will become immersed in the umbra before it sets.

Along a narrow zone running from Lake Winnipeg, south through western Minnesota to the Texas-Louisiana border, the moon will set while in total eclipse, while across the west part of the U.S., the moon will be seen emerging from the umbral shadow as it descends in the western sky, weather permitting. Alaska and Hawaii will have an excellent view as the eclipse will occur in the middle of the night.

Some astronomy books will tell you that it's impossible to see Venus in the middle of the night. So it will be hard to believe that Venus can stay up as late as it will during the third week of May, when it will be setting around for some localities after midnight.

Venus reaches its greatest angular distance –- 45 degrees to the east of the sun — on June 6. The planet appears brightest in early summer as it heads back down toward the sun, reaching its greatest brilliancy for this apparition on the evening of July 10 at negative 4.5 magnitude. [See photos of the planet Venus]

Shortly after sunset, in the west-southwest sky, two bright planets, Venus and Jupiter, will be strikingly close together. They will appear to be only about half the apparent width of the moon in Earth's sky, potentially making for a very eye-catching sight.

The Perseid meteor shower is usually considered to be among the best of the annual meteor displays thanks to its high rates. Lucky observers can sometimes see up to 90 meteors an hour during the shower.

Last summer, the moon was a brilliant waning gibbous phase and presented a major nuisance for those who wanted a dark sky to watch the shower. But in 2015, the moon will be a couple of days before new and will not rise until just before daybreak, leaving much of the night dark for prospective observers.

The Last Quarter moon will pass in front of one of the brightest stars in the sky, Aldebaran, the angry orange eye of Taurus the Bull.  This occultation will be visible over eastern North America, but there will be another visible over a much wider region of North America early on Nov. 26 – Thanksgiving morning.

Eclipse watchers across the central and eastern part of North America – roughly east of a line from Winnipeg, Manitoba, to Houston – will see the entire lunar eclipse from start to finish, while those farther to the west will see the moon rise with the eclipse already in progress.

On the other side of the Atlantic, viewers in Western and Central Europe will see the entire eclipse before the moon sets on the morning of Sept. 28, although the moon will vanish below the western horizon from Eastern Europe and western Asia before its conclusion. Totality will last 72 minutes.

Not only will the moon undergo a total eclipse on this night, but the moon will also very nearly coincide with perigee, its closest point to Earth. The moon turns full at 10:51 p.m. EDT and just 51 minutes earlier it will arrive at its closest point to the Earth in 2015 at a distance of 221,753 miles (356,877 kilometers). Expect a large range in ocean tides (exceptionally low to exceptionally high) for the next few days. [See amazing images of from a 2014 lunar eclipse]

For the second time in 2015, Venus and Jupiter will engage in a close conjunction, this time separated by just over 1 degree, Venus passing to the southwest (lower right) of Jupiter and shining more than 10 times brighter than the huge gas giant.

The Taurid meteors, sometimes called the "Halloween fireballs," show up each year between mid-October and mid-November. The shower should peak from Nov. 5 to Nov. 12 in 2015. Meteor expert David Asher has also discovered that Earth can periodically encounter swarms of larger particles, which can produce fireball meteors in certain years, and 2015 is predicted to be one of those years.

If there is one meteor display guaranteed to put on a very entertaining show it is the Geminids. Now considered by most meteor experts to be at the top of the list, surpassing in brilliance and reliability even the August Perseids. The moon will be a narrow crescent and will set early in the evening, leaving the sky dark all through the rest of the night – perfect conditions for watching shooting stars.

This will be your chance to see an average of as many as two meteor sightings every minute, or 120 per hour!

Editor's note: If you have an amazing skywatching photo you'd like to share for a possible story or image gallery, please contact Managing Editor Tariq Malik at spacephotos@space.com.