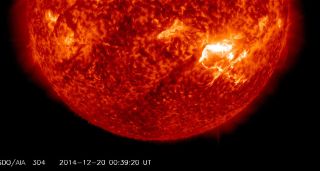 The sun fired off a massive solar flare late Friday (Dec. 19), after days of intense storms from our nearest star.

The huge solar flare registered as an X1.8-class event, one of the most powerful types of flares possible, and was captured on camera by NASA's powerful Solar Dynamics Observatory. The flare triggered a strong radio blackout for parts of Earth as it peaked Friday at 7:28 p.m. EST (0028 Dec. 20 GMT), according to an alert from the U.S. Space Weather Prediction Center overseen by NOAA.

The solar flare erupted from a sunspot region classified as Active Region 2242, and more sun storms could occur from the region. [Biggest Solar Flares of 2014 in Photos]

"The region remains large and complex," SWPC experts wrote in the update. "More minor to moderate radio blackouts are expected, with an ongoing chance for another strong event."

Friday's solar flare capped an active week of sun storms. Earlier in the week, another active sunspot region called AR 2241 fired off two intense M-class (moderate) flares, one late Tuesday (Dec. 16) registering as an M8.7-class sun storm, and the other on Thursday (Dec. 18) that ranked as an M6.9 solar flare. Sunspots are regions of intense magnetic field activity on the sun that can trigger solar flares.

X-class solar flares are the strongest solar flares the sun can unleash. When aimed directly at Earth, they can disrupt communications and GPS navigation systems on Earth, and even pose a threat to satellites and astronauts in space.

M-class solar flares are about one-tenth the size of X-class flares, but can supercharge the Earth's auroras, or northern lights, resulting in dazzling displays. A huge eruption of solar material — called a coronal mass ejection — from the earlier M-class flares is expected to trigger geomagnetic storms on Earth, possibly amplifying the northern lights, this weekend, SWPC experts wrote in a separate update.

The sun follows an 11-year space weather cycle with lulls and peaks, with the current cycle known as Solar Cycle 24. The current cycle reached its peak phase in recent years.