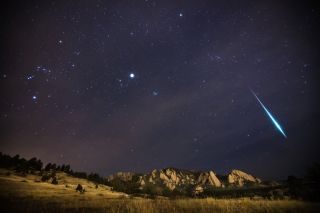 The spectacular Geminid Meteor shower hits peak activity this weekend. Though competing with some unfortunate moonlight, the shower still should make for a must-see astronomical event.

Even if you can't see the meteor display from your part of the world, you can watch them online. The online Slooh Community Observatory will host a live webacst of the Geminid meteor display on Saturday night beginning at 8 p.m. EST (0100 Dec. 14 GMT).You can also watch the Slooh webcast directly:http://live.slooh.com/. NASA meteor expert Bill Cooke will also host a live Geminids webchat on Saturday night from 11 p.m. to 3 a.m. EST (0400 to 0800 GMT), as well as a live webcast.

You can watch the webcasts of the Geminid shower live on Space.com, starting at 8 p.m. EST, courtesy of Slooh and NASA. The Italy-based Virtual Telescope Project will also host a Geminds webcast, beginning at 9 p.m. EST (0200 GMT).

Although the bright moon will be high in the sky by 11:30 p.m. local time Saturday (Dec. 13) (during the shower's peak), skywatchers can still catch a potentially incredible show before the moon creeps above the horizon, washing out the sky. Stargazers might be able to see an average of one or two Geminid meteors per minute Saturday before the moon rises.

By around 9 p.m., the constellation Gemini — the part of the sky where the meteors seem to emanate from — will have climbed more than one-third of the way up from the horizon. Meteor sightings should begin to really increase noticeably thereafter. By around 2 a.m., the last-quarter moon will be low in the east-southeast, but Gemini will stand high overhead. So you might still see a good number of meteors in spite of the moon's presence.

The Geminids are, for those willing to brave the chill of a December night, a very fine winter shower, and usually the most satisfying of all the annual showers. They can even surpass the brilliant August Perseid meteor shower.

Studies of past displays show that the Geminid shower is rich both in slow, bright, graceful meteors and fireballs, as well as in faint meteors, with relatively fewer objects of medium brightness. Many Geminids appear yellowish in hue; some even appear to form jagged or divided paths.

These meteors travel at a medium speed and appear to emanate, specifically, from near the bright star Castor, in the constellation of Gemini, the Twins, hence the name "Geminid." The track of each meteor does not necessarily begin near Castor, nor even in the constellation Gemini, but the path of a Geminid extended backward always passes through a tiny region of sky about 0.2-degrees in diameter (an effect of perspective). In apparent size, that's less than half the width of the moon. As such, this is a rather sharply defined radiant as most meteor showers go. It suggests the stream is "young," perhaps only several thousand years old.

Generally speaking, depending on your location, Castor begins to come up above the east-northeast horizon right around the time evening twilight comes to an end. As the Gemini constellation begins to climb the eastern sky just after darkness falls, there is a fair chance of perhaps catching sight of some "Earth-grazing" meteors. Earthgrazers are long, bright shooting stars that streak overhead from a point near to even just below the horizon. Such meteors are so distinctive because they follow long paths nearly parallel to the Earth's atmosphere. [Check out stargazing events in December (Sky Maps)]

Because Geminid meteoroids are several times denser than the comet dust that supply most meteor showers and because of the relatively slow speed with which the Geminids encounter Earth (22 miles or 35 kilometers per second), these meteors appear to linger a bit longer in view than most. As compared to an Orionid or Leonid meteor that can whiz across your line of sight in less than a second, a Geminid meteor moves only about half as fast. Personally, their movement reminds me of field mice scooting from one part of the sky to another.

Tips to keep warm while stargazing

Again, your local weather will likely be more appropriate for taking a hot bath than a meteor shower! Indeed, at this time of year, meteor watching can be a long, cold business. You wait and you wait for meteors to appear. When they don't show up right away, and if you're cold and uncomfortable, you're not going to keep looking for meteors for very long. Therefore, make sure you're warm and comfortable. Warm cocoa or coffee can take the edge off the chill, as well as provide a slight stimulus. It's even better if you can observe with friends. That way, you can cover more sky. Also, be sure to give your eyes time to dark-adapt before starting.

The Earth moves quickly through this meteor stream, producing a somewhat broad, lopsided activity profile. Hourly rates of Geminid meteor appearances started increasing this past Wednesday night, reaching just above one-quarter-peak strength. Late Saturday night up until the moon rises before midnight, a single observer might average as many as 60 to 120 meteors per hour.

After Saturday night, the rates should drop off more sharply; by late Sunday, they will have diminished to about 30 to 60 per hour. Yet, there is good reason to keep watching for Geminids even after their peak has passed, for those "late" Geminids tend to be especially bright. And renegade late stragglers might be seen for a week or more after the night of maximum activity.

Aside from their slow speed and spectacular display, the Geminids may also stand apart from the other meteor showers due to their origin. They seem to have been spawned not by a comet, but by 3200 Phaethon, an Earth-crossing asteroid. Then again, the Geminids may be comet debris after all, as some astronomers think Phaeton is really the dead nucleus of a burned-out comet that somehow got trapped into an unusually tight orbit.

Editor's Note: If you capture an amazing photo of the Geminid meteor shower or any other skywatching image you'd like to share for a possible story or image gallery, please contact managing editor Tariq Malik at spacephotos@space.com.