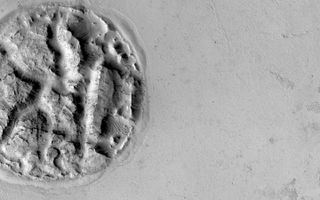 The mysterious circular feature on Mars, which was imaged by the HiRISE camera aboard NASA's Mars Reconnaissance Orbiter (MRO), lies in the "Athabasca" region near the Martian equator and measures about 1.2 miles (2 kilometers) wide. It appears to be an island in a sea of relatively smooth lava and possibly had a volcanic origin, NASA officials say.

"Perhaps lava has intruded underneath this mound and pushed it up from beneath. It looks as if material is missing from the mound, so it is also possible that there was a significant amount of ice in the mound that was driven out by the heat of the lava," NASA officials wrote in a description of the image, which was released on Wednesday (Dec. 3).

"There are an array of features like this in the region that continue to puzzle scientists," they added. "We hope that close inspection of this HiRISE image, and others around it, will provide some clues regarding its formation."

Volcanism has played a major role in shaping the Martian surface over the eons, and some scientists think the planet may still be volcanically active today. Mars hosts the largest volcanoes in the solar system; the biggest of them all, Olympus Mons, rises about 16 miles (26 kilometers) into the Red Planet sky. Olympus Mons is about three times taller than Earth's loftiest peak, Mount Everest.

MRO is one of five active probes circling Mars at the moment. The other three are NASA's Mars Odyssey and MAVEN spacecraft, India's Mangalyaan probe and Europe's Mars Express.