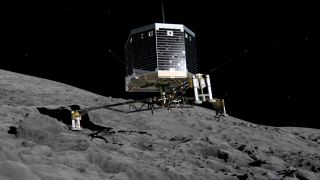 Artist's concept of the European Space Agency's Philae lander on Comet 67P/Churyumov-Gerasimenko. Philae touched down on the comet on Nov. 12, 2014; it may actually have bounced off after the initial attempt and come back down again.
(Image: © ESA/ATG medialab )

After a nail-biting silence, European scientists are back in touch with a probe currently descending to the face of a comet speeding through deep space. As expected, European Space Agency (ESA) officials regained contact with the Rosetta mission's Philae lander at 6:07 a.m. EST (1107 GMT) today (Nov. 12) after the probe was released from its Rosetta mothership earlier in the morning.

ESA's mission control room erupted in cheers when operators saw that Philae was back in touch with Rosetta, which relays the 220-pound (100 kilogram) probe's information to Earth. Scientists are expecting to learn if Philae successfully touched down on the surface of Comet 67P/ Churyumov-Gerasimenko by around 11:02 a.m. EST (1602 GMT) today. [Watch ESA's Philae landing webcast live on Space.com]

Officials are expecting to have pictures of Philae's descent later this morning, so check Space.com's comet landing complete coverage page to see them when they are released.