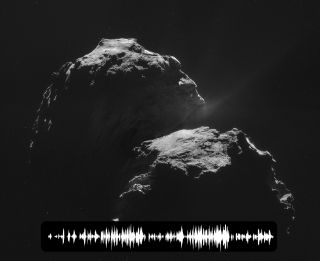 Scientists have picked up on the "sound" of Comet 67P/Churyumov-Gerasimenko speeding through space.
(Image: © ESA/Rosetta/NavCam)

Scientists have picked up on the mysterious "song" of a comet speeding through deep space.

European Space Agency officials have used their Rosetta spacecraft to listen to a sound emitted by Comet 67P/Churyumov-Gerasimenko. The comet song capture by Rosetta is produced by "oscillations in the magnetic field in the comet's environment," ESA officials said in a statement.

The Rosetta spacecraft was able to pick up the strange, echoed clopping sound, but if a human were floating through space next to the comet, he or she wouldn't hear anything at all. Comet 67P/C-G is singing well below the frequency that the human ear can hear, according to ESA. The frequency of the sound was increased by a factor of approximately 10,000 for an audible rendering of the comet's tune. [Rosetta Mission's Comet Landing: Full Coverage]

The scientists that discovered the sound still aren't exactly sure how it's created, though they have some ideas. ESA scientists think that the sound could be produced when neutral particles of the comet are sloughed off into space and electrically charged through ionization, but officials still aren't sure how the physics of the oscillations work.

"This is exciting because it is completely new to us," Karl-Heinz Glaßmeier, head of Space Physics and Space Sensorics at the Technische Universität Braunschweig, Germany, said in a statement. "We did not expect this and we are still working to understand the physics of what is happening."

Rosetta's magnetometer experiment first recorded the song when it was flying within about 62 miles (100 kilometers) of the comet in August. The magnetometer is part of a five-instrument suite, called Rosetta's Plasma Consortium (RPC). The instruments are designed to monitor how the comet interacts with the solar wind and plasma emitted by the sun. The RPC also looks at the structure of the comet's atmosphere, known as a "coma." (Glaßmeier is also the principal investigator for the RPC.)

Tomorrow (Nov. 12), Rosetta is expected to release its Philae lander down to the surface of Comet 67P/C-G. If it works, the landing will mark the first time humans have soft-landed a probe on the face of a comet. You can keep up with the landing in a live Philae webcast on Space.com

Rosetta and Philae will be responsible for gathering data about the comet to help scientists learn more about the icy wanderers, remnants from when the solar system formed billions of years ago. Rosetta should keep studying the comet from orbit until December 2015, after its close approach with the sun in August. If Philae's landing is successful, it should be able to study the comet from its landing site until March 2015.