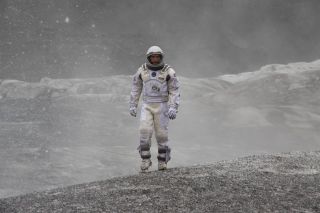 The space epic "Interstellar," out in theaters this weekend, presents a dire vision for the future of humanity. Climate change has ravaged Earth, leaving humans with a choice: Go extinct or pack up and find a new home.

Should we ever find ourselves facing a real-life "Interstellar" dilemma, NASA might be able to help. The space agency has several ongoing and planned missions to scan the cosmos for Earth-like plants beyond our solar system, as well as to figure out how people might survive on a hostile alien world.

Astronomers had long theorized that they would find planets around other stars beyond the sun. But the first exoplanet discoveries were only confirmed in the 1990s. ['Interstellar' in Pictures: A Space Epic Gallery]

The 2009 launch of NASA's Kepler Space Telescope ushered in a boom of exoplanet discovery. Perched about 64 million miles (104 kilometers) above Earth, the telescope detected subtle changes in brightness as planets passed in front of their parent stars. Kepler proved that it's possible every star has at least one planet, according to NASA, and it helped scientists discover thousands of exotic alien worlds, including planets with two stars like Tatooine in "Star Wars."

The prolific telescope was sidelined in 2013 after an equipment failure. But NASA plans to launch another planet-hunter in 2017, the Transiting Exoplanet Survey Satellite, or TESS, which will focus on finding Earth-size planets that could be capable of supporting life.

Even if we do find a promising alien planet circling another star, how will we get there? That remains a huge challenge. The distance between stars is impossibly long for spacecraft using existing chemical rockets. The closest alien planet, Alpha Centauri Bb, lies just 4.3 light-years away. That means that even if we figured out a way to travel at the speed of light, it would still take more than four years to get there. Humans have only managed to send one object beyond the reaches of our solar system: Voyager 1, which launched in 1977 and entered interstellar space in 2012. At the rate it's traveling, the robotic spacecraft won't encounter another star for at least 40,000 years, according to NASA.

Some engineers who are thinking about interstellar travel see space-bending "warp drives" as an option. Others are in favor of nuclear fusion drives and gigantic solar sails. But Les Johnson, deputy manager of the Advanced Concepts Office at NASA's Marshall Space Flight Center in Huntsville, Ala., told Space.com last year that he thinks the first manned interstellar flight is still hundreds of years away.

"I think before we ever really undertake sending something to another star, we will probably have to be masters of our own solar system," Johnson said.

Indeed, NASA officials say there is still a lot to explore in our own neighborhood. Right now, Mars is only inhabited by robots, like NASA's Curiosity rover. But human missions to the barren Red Planet could be an ultimate test of off-Earth survival. Astronauts would have find a way to extract water locked in Martian rocks to create breathable air, drinkable water and even components for rocket fuel. Looking ahead to that future, NASA will launch the first test flight next month for its Orion space capsule, a vessel designed to travel far out into the solar system, perhaps on a mission to an asteroid or Mars.