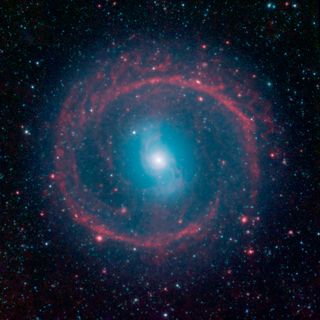 A ring of newborn stars wheels around the core of an ancient galaxy in an amazing new image captured by NASA's Spitzer Space Telescope.

The photo, taken by Spitzer observatory in infrared light, shows a burst of starbirth in the galaxy NGC 1291, which lies 33 million light-years from Earth and is about 12 billion years old. Older stars are colored blue in the photo and cluster mostly in the central region of the galaxy; younger, red stars appear around the fringes.

"The rest of the galaxy is done maturing," said lead researcher Kartik Sheth, of the National Radio Astronomy Observatory of Virginia, in a statement. "But the outer ring is just now starting to light up with stars." [See more amazing photos of galaxies]

The image was captured as part of a study on structural features in barred galaxies, so called because they have a long central bar of stars within them. The Milky Way is an example of a barred spiral galaxy.

Astronomers believe NGC 1291's bar was created when the galaxy was young. The bar moves material through the galaxy, shifting stars and gas into noncircular orbits. In some places, galactic gas is pushed together, where it collapses to form stars, researchers said.

Scientists believe that early in a galaxy's history, the bars push gas into the center and spark starbirth there. As the galaxy ages, the fuel depletes and stars are born farther and farther from the core.

The Spitzer survey aims to discover more about how barred galaxies form and evolve, which could shed light on the conditions that created the Milky Way, among other things.

"Now, with Spitzer we can measure the precise shape and distribution of matter within the bar structures," Sheth said. "The bars are a natural product of cosmic evolution, and they are part of the galaxies' endoskeleton. Examining this endoskeleton for the fossilized clues to their past gives us a unique view of their evolution."