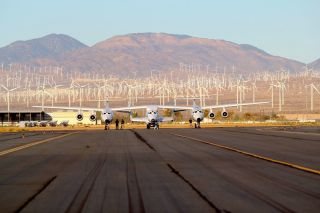 Virgin Galactic's SpaceShipTwo is seen attached to its WhiteKnightTwo carrier aircraft on a runway at the Mojave Air and Space Port in Mojave, California, during an Oct. 7, 2014, glide test flight. The spacecraft will resume rocket-powered test flights soon.
(Image: © Virgin Galactic)

LAS CRUCES, N.M. — The private spaceflight company Virgin Galactic will soon begin a new round of rocket-powered test flights of the commercial spaceliner SpaceShipTwo to prepare for eventual passenger flights to space.

"We've done a lot of development tests over the years, but what we've been doing recently are qualification tests where you're firing the same motor design multiple times to make sure you're seeing the same thing every time," Whitesides told Space.com Wednesday (Oct. 15) here at the International Symposium on Personal and Commercial Spaceflight. "So now we feel ready to put that motor on the spaceship."

Whitesides did not specify an exact timeline for the test flights. However, Virgin Galactic did successfully perform a glide flight of SpaceShipTwo. The company's last rocket-powered flight was on Jan. 10, when SpaceShipTwo went supersonic during its highest flight yet.

SpaceShipTwo is a suborbital spacecraft designed to launch two pilots and six paying passengers on private trips into space. Tickets for a SpaceShipTwo flight are $250,000 per seat, and hundreds of would-be space travelers have already booked tickets.

That waiting list includes high-profile celebrities, such as actor Ashton Kutcher and singer Lady Gaga. Virgin Galactic's founder, British billionaire Sir Richard Branson, has said that SpaceShipTwo could make its first passenger flights to space in 2015. Currently, the spacecraft flies from a base at the Mojave Air and Space Port in Mojave, California, but Virgin Galactic is planning to ultimately launch its passenger flights out of Spaceport America in New Mexico.

SpaceShipTwo is built to launch from a high-altitude carrier aircraft called the WhiteKnightTwo, offer passengers a few minutes of weightlessness during flight and then return to Earth for a runway landing. The vehicle is built for short up-and-down trips, and not for full orbital flights around the Earth.

The spacecraft is an evolution of the SpaceShipOne suborbital spacecraft built by aerospace visionary Burt Rutan and his company Scaled Composites in Mojave, California. In 2004, the team behind SpaceShipOne won the $10 million Ansari X Prize for reusable manned commercial spacecraft.

While Virgin Galactic draws plans for more test flights with the first SpaceShipTwo (called the VSS Enterprise), the company is also building the second vehicle in its planned suborbital fleet. Virgin Galactic has said in the past that it is aiming for a fleet of five SpaceShipTwo spacecraft and two WhiteKnightTwo carrier planes.

The primary structure for the second SpaceShipTwo should be complete by the end of this year. With full assembly expected to be complete in 2015, Whitesides said. In the meantime, it's not too early to start thinking about a name for the new spaceship, he added.

"We're starting to think about that I hope" Whitesides said, adding that he issued a call for suggestions during an Oct. 4 event in Mojave, California. "I opened it up to the customers for ideas, and they had some good ones."

Meanwhile, Virgin Galactic is making progress on two other projects that will give it a diverse foothold on access to space.

The company is developing its new unmanned LauncherOne rocket to loft small satellites into orbit from a WhiteKnightTwo carrier plane. Virgin Galactic is also working with the aerospace companies Northrop Grumman and Scaled Composites to design a space plane concept for the U.S. military.

The XS-1 experimental space plane, as it is called, is a project led by the U.S. Defense Advanced Research Projects Agency (DARPA) to develop an affordable, reliable and reusable spacecraft. DARPA has tapped three different teams to provide design concepts for the XS-1 space plane. In addition to the Virgin Galactic/Northrop Grumman team, DARPA is seeking designs from Boeing, as well as the team of Masten Space Systems and XCOR Aerospace.

"I think that diversification is important in this business, because I think it makes us stronger," Whitesides said.