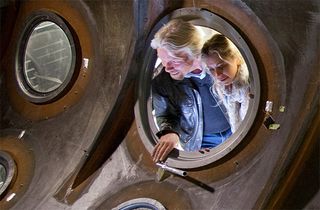 Richard Branson and daughter Holly take a look at what will be the second ship in the Virgin Galactic fleet. Branson had hoped to fly with both his children, but Holly, now pregnant, won't be on the inaugural flight.
(Image: © Virgin Galactic)

Less than a month ago, Virgin Group chief Richard Branson told Fox Business Network he'd be "bitterly disappointed" if he wasn't able to take the first commercial ride aboard Virgin Galactic’s SpaceShipTwo before the end of the year.

PHOTOS: When Virgin Galactic Broke the Speed of Sound

"We've got three more rocket tests and then we should be up, up and away by the end of the year. That should be the start of the program. The spaceport's ready. We are now in the last few weeks before finally embarking on the space program," Branson told anchor and global markets editor Maria Bartiromo in August. [Rise of SpaceShipTwo: Test Flight Photos]

"I'll be bitterly disappointed if I'm not into space by the end of the year," he added.

In an interview Tuesday with NBC News TODAY guest anchor Brian Williams, Branson acknowledged he won't be flying this year.

"It's taken longer than we thought," said Branson, who appeared on the show to promote his new book, "The Virgin Way."

"We're now going through the final testing stages. We'll be doing at least one flight into space before the end of the year, then move the whole operation to New Mexico where the spaceport is.

"I'll be going up with my son Sam 'earlyish' in the new year," Branson said.

Spaceship builder Scaled Composites is preparing to resume powered test flights in Mojave, Calif., following the decision to switch to an alternative type of rocket fuel.

SpaceShipTwo is a six-passenger, two-pilot, air-launched vehicle based on the SpaceShipOne prototype, which made three suborbital space rides in 2004.

So far, more than 700 people have put down deposits or paid for rides on SpaceShipTwo. Tickets are now selling for $250,000.