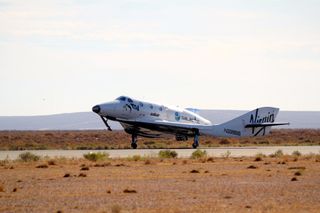 SpaceShipTwo completed an unpowered "glide flight" from California's Mojave Air and Spaceport Tuesday, Virgin Galactic representatives said. The vehicle rotated its tail and wings upward during the test, "feathering" them as it would to increase stabiilty during the descent phase of a bona fide suborbital spaceflight.

"‪#SpaceShipTwo is safely back on the ground after her 54th test flight, including her 10th test of the feather system," company officials said today via the company's Twitter account, @virgingalactic. "Coupled with several good, full duration ground tests of SS2's rocket motor in recent weeks, today’s flight brings spaceflight closer."

Three days ago, Virgin Galactic marked the 10-year anniversary of a big day in the company's history. On Oct. 4, 2004, SpaceShipOne — which was designed and built by famed aerospace engineer Burt Rutan's firm, Scaled Composites — won the $10 million Ansari X Prize after becoming the first manned, private vehicle to reach space twice within a two-week span.

British billionaire Sir Richard Branson licensed SpaceShipOne's technology and built Virgin Galactic around it. SpaceShipOne evolved into SpaceShipTwo, a six-passenger spaceliner that Branson has said should begin commercial operations sometime next year. Seats aboard the vehicle currently cost $250,000 each.

Another suborbital space plane, XCOR Aerospace's Lynx vehicle, could be up and running at about the same time. Tickets to ride the one-passenger Lynx go for $95,000.

SpaceShipTwo is designed to be carried aloft by an aircraft known as WhiteKnightTwo. At an altitude of about 50,000 feet (15,000 meters), the carrier plane drops SpaceShipTwo; at this point, during commercial flights, the space plane's onboard rocket motor will blast it up to surborbital space. Many of SpaceShipTwo's early flight tests were captive-carry trips attached to WhiteKnightTwo.

SpaceShipTwo has now completed 34 free-flight tests, the vast majority of which have been glide flights. The vehicle has turned on its rocket motor mid-flight three times, most recently in January 2014.