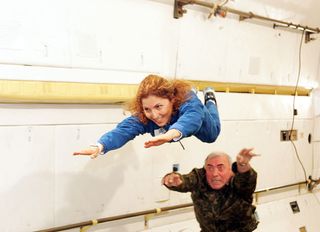 Ansari X Prize backer Anousheh Ansari gets a push during weightless training aboard a modified aircraft. Ansari is training as a backup for Japanese space tourist Daisuke Enomoto - set to fly to the ISS on Sept. 14, 2004 - and is in line to become the world's first female private spaceflyer.
(Image: © Space Adventures.)

For U.S.entrepreneur Anousheh Ansari,failure to reach space is not an option.

With hereyes on a possible 2008 flight to the International SpaceStation (ISS), Ansari has spent the lastfew months training as a backup spaceflyer for Japanesebusinessman Daisuke Enomoto, who is paying$20 million for a 10-day roundtrip to the orbital laboratory currently set to launch on Sept. 14.

"It's beena wonderful experience for me," Ansari told reportersat NASA's Johnson Space Center during a brief break in flight training lastmonth. "I know I'm a backup and am not going to be flying, but the wholelearning experience, learning about the program, getting to know some of theastronauts and cosmonauts that could fly...it's verywonderful."

Enomoto'strip - and Ansari's backup training- were brokered by the Virginia-based firm Space Adventuresunder an agreement with Russia's Federal Space Agency. Space Adventures iscurrently the only firm offering orbital seats for paying customers and hasarranged for threeprevious space tourists to reach the ISS.

Ansari,38, is in line to become the world's first female space tourist, but takesissue with what she sees as an over-simplistic label to a complicated - yetexciting - experience.

"Touristsare people who just buy a ticket and then they go," Ansarisaid, adding that through her training she's learned that Russia's Soyuzvehicle is an extremely reliable - if cramped - spacecraft. "They don't trainfor six months and try to learn every system."

Ansari'sfamily made a multimillion-dollar contribution to back the Ansari X Prize, a $10 million suborbitalcompetition for privately-developed, reusable spacecraft. A team led by veteranaerospace designer Burt Rutan and backed by millionaire Paul Allen won thecontest in 2004 when their piloted SpaceShipOnevehicle launched into suborbitalspace twicein two weeks.

Explorerspaceport plans in the UnitedArab Emirates and Singaporeare moving ahead in anticipation of the spacecraft's development.

"SomethingI like to concentrate on is to bring more awareness about the importance of thespace program because, right now, the general public is so disassociated from[it] and that's a shame," Ansari said. "I think it'simportant for our future."

Ansarisaid she leaped at the chance when Space Adventures officials contacted herasking whether she'd be interested in serving as Enomoto'sbackup. But while she would welcome the spaceflight opportunity in theoff-chance Enomoto is unable to fly next month, Ansari would rather wait for her own dedicated mission.

"I'm mentally prepared to do that and it would be a greatpersonal experience," Ansari said of fulfilling herresponsibilities as backup. "But for my flight I have a lot of projects thatI'd like to do, and if I fly now that means that none of those projects wouldbe there.

"If I'mpresented with the opportunity to go, I would definitely take it," Ansari said, adding that she has seats reserved on Rutan's SpaceShipTwo vehicle under development for Britishbillionaire Sir Richard Branson's Virgin Galactic spaceliner business. "I have a seat reserved on hisplane...whoever flies first."

While Ansari is eagerly working toward a spaceflight of her own,she will have to wait in line.

Earlierthis year, U.S. businessman and former Microsoft software developer CharlesSimonyi signeda contract with Russian space officials to fly toward the ISS in Spring 2007, which would be on the next Soyuz to fly after Enomoto launches with the ISS Expedition14 crew.

Malaysia isalso hopingto launch its first astronaut aboard a Russian spacecraft in 2007, and anyof those plans could be dependent on whether NASA or the EuropeanSpace Agency will require Soyuz seats to transfer their astronauts to and fromthe ISS - a variable that hinges on the frequencyof space shuttle visits to the orbital platform.

"One goodthing is, maybe, I will generate some positive media about the Middle East witheverything going on," said Ansari, who was born in Iran."I've gotten so many calls and e-mails and mail, especially from women in Iran,and other Middle Eastern countries that are excited that someone from [there]gets to go up...and a woman!"

Meanwhile, Ansari said she takes heart in advancements like the recentlaunchof Genesis-1- a prototype for inflatable space structures that could lead to orbital hotelsor other habitats - by BigelowAerospace of Las Vegas, Nevada.

"Right now,that's the only other potential destination in the future for commercial space travelersto go to," Ansari said of the potential orbitalhabitats under development by Bigelow Aerospace. "If you increase the number ofpeople you want to go...the ISS won't be an ideal location. I'm happy to seesomebody building a location that we can fly to."

But whethershe rides a Soyuz to the ISS, an Explorer vehicle, a version of SpaceShipTwo or some other spacecraft,Ansari is confident she'll slip the bonds of Earth eventually.

"Is thereanother way to get to space," Ansari asked with asmile. "Anyway you can fly me, I'll go."