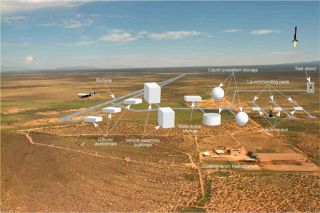 "Nowwe move into implementation," Homans told SPACE.com following thekickoff meeting of the Spaceport Authority. An early task of the new group isto go through the environmental impact process--an effort that is to start movingforward within the next 30 days, he said.

"Thatwill most likely take until the end of next summer to complete that," Homanssaid, with the anticipation that a New Mexico spaceport license would be grantedby the FederalAviation Administration (FAA) sometime in 2006, he said.

Homanssaid that prior to the granting of the FAA license, he expects to see activityat the spaceport next year, including possibly low altitude, experimentalrocket testing.

"Oncewe've got the license, then that gives us the ability to actually launch craftinto space from there," Homans added. The New Mexico spaceport itself--nearUpham (roughly 45 miles north of Las Cruces and 30 miles east of Truth orConsequences)--covers some 27 square miles, having a north-south configuration,he said.

"Thereare two private ranches out there...otherwise it's all state land, and you've gotto cross a little bit of BLM [Bureau of Land Management] land to get to it,"Homans said. "It's a clean canvas. We can create it from scratch."

Thoseworking on the New Mexico spaceport have been busy over the last three months. Acomprehensive, multi-phase strategic plan is under development.

Partof that process has been "talking to players and future players" in the blossomingcommercial space arena, Homans noted, "to really get a sense of where they areheaded and what they need."

Thosediscussions confirmed to Homans a key fact: "This is uncharted terrain rightnow...we're on the frontier here. We're inventing it as we go."

Thereare no models for how a spaceport should be built. You can't draw from decadesof earlier work, Homans observed.

"Thisis an industry that's really in its infancy. There are lots of ideas aboutwhere it's headed, and there's nothing routine about it," Homans stated. "Theseare entrepreneurs, dreamers, engineers, visionaries...a unique combination ofpeople and businesses."

Homanssaid the New Mexico Spaceport Authority is keen on partnering with privatecompanies that "want to get in on the ground floor of this industry and becomefinancial partners with the state in building and operating the spaceport."

The Office of the AssociateAdministrator for Commercial Space Transportation (AST) is the onlyspace-related line of business within the FAA.

Smithadded that states, communities and investors are converging to capitalize onthe promise of space. "These are people with a strong commitment and confidencein the future space development can bring," she explained.

Kellyis responsible for all engineering, safety and operational activitiesassociated with the annual X Prize Cup and Personal Spaceflight Expo - apartnership of the X Prize Foundation and the state of New Mexico.

TheX Prize Foundation is also assisting in the development of the New Mexico SouthwesternRegional Spaceport.

"Thefirst meeting of the New Mexico Spaceport Authority was a milestonetransition," said Kelly, "from the decade-long efforts of the Spaceport Commissionto an official, established spaceport program having the full commitment of thestate."

Kellytold SPACE.com that the Southwest Regional Spaceport has advantagesshared by no other location, giving it the potential to be the center forcommercial space activities.

"Thisyear, we have the Countdown to the X Prize Cup, an event which carries forththe momentum established by the Ansari X Prize. Next year will see the firstofficial X Prize Cup event. We hope to grow this to an event on a par with theReno Air races, or greater, and in so doing attract more business to the spaceport.We hope to make it a thriving incubator for the personal spaceflight industryof tomorrow," Kelly said.

Momentumis picking up for the upcoming Countdown to the X Prize Cup, slated for October6-9 in New Mexico.

Amongthose showing off their wares is XCOR Aerospace, Inc. The company will conductmultiple flight tests of its EZ-Rocket as part of the Countdown to the X PrizeCup activities. XCOR is a California corporation located in Mojave, developingand producing safe, reliable, and reusable rocket engines and rocket-poweredvehicles.

XCORis one of a rapidly growing roster of rocket roaring events scheduled,including a public symposium on the future of spaceflight at New Mexico StateUniversity in Las Cruces on October 6th; educational and public activities atthe New Mexico Museum of Space History in Alamogordo on October 7-8; and onOctober 9, the Personal Spaceflight Expo at the Las Cruces International Airport.