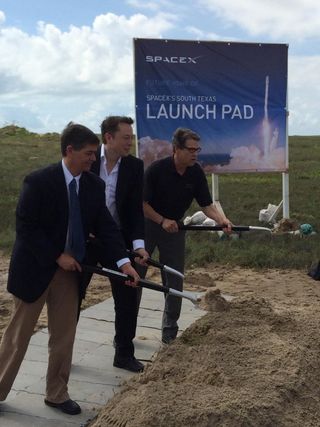 The private spaceflight company SpaceX has begun construction on a new launch site in Texas, a seaside spaceport that will be used to blast commercial satellites into orbit a few years from now.

SpaceX officially broke ground on the facility, on Monday (Sept. 22) in Brownsville, Texas. The new launch site will be located near Boca Chica Beach, at the far southern tip of the Lone Star State.

"We appreciate the leadership of [Texas] Governor Rick Perry and numerous other federal, state and local leaders who have helped make it possible for SpaceX to build the world’s first commercial launch complex designed specifically for orbital missions," SpaceX's billionaire founder and CEO, Elon Musk, said in a statement.

"With today's groundbreaking at Boca Chica Beach, we will begin an investment in South Texas that will create hundreds of jobs and, over time, contribute hundreds of millions of dollars into the local economy," Musk added.

Texas offered SpaceX about $15 million in incentives to build the spaceport within the state's borders. The facility should be operational by 2016, SpaceX representatives said.

The Hawthorne, California-based SpaceX currently launches its Falcon 9 rockets from pads at the Cape Canaveral Air Force Station in Florida, as well as California's Vandenberg Air Force Base. The company also has a lease to use NASA's historic Launch Pad 39A at the Kennedy Space Center in Florida, and launched its first Falcon 1 rockets from a remote launch site on Kwajalein Atoll in the Pacific Ocean.

SpaceX holds a $1.6 billion deal to fly 12 robotic cargo missions to the International Space Station (ISS) for NASA using the company's Dragon capsule and Falcon 9 rocket. And last week NASA announced that it had awarded SpaceX $2.6 billion to ferry astronauts to and from the space station with an upgraded version of Dragon, beginning in 2017. (NASA also gave Boeing $4.2 billion in another astronaut-taxi contract.)

But SpaceX's ISS cargo and crew missions won't blast off from the new Texas spaceport, which is designed just for commercial satellites. Resupply flights to the orbiting lab — three of which SpaceX has already completed, with a fourth underway at the moment — will continue to launch from Florida's Cape Canaveral Air Force Station, while crewed missions will lift off from NASA's Kennedy Space Center, which is right next door.

Texas State Senator Eddie Lucio, Jr., who worked with the governor's office to get the $15 million allocated for the SpaceX incentives, said he has high hopes for the new spaceport.

"I hope the new launch site will propel a dramatic culture change in our region of the state, encouraging more of our children to pursue careers in engineering and science," Lucio said in a statement. "Future generations of South Texas residents will look to this site and know that not even the sky is the limit for where their dreams may take them."