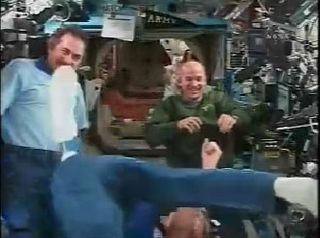 Threeastronauts aboard the InternationalSpace Station (ISS) took a break in their orbital work Thursday for anapparently fun-filled phone call with soccer champions from Spain.

"It's agreat honor for us to speak with you guys up in space," FC Barcelona coachFrank Rijkaard told the Expedition 13 astronauts."I think you are the true heroes up in space and you're doing a great job."

FCBarcelona players got a backstage tour of NASA's astronaut training facilitiesat JSC, and will play Mexico's Club America tonight at Houston's ReliantStadium. During their call to the ISS, the players were joined by Brazil'sfirst astronaut Marcos Pontes, who launchedtoward the station earlier this year with Vinogradov and Williams.

"HeyMarcos, good to see you," Williams said, adding that he looks forward seeingthe Brazilian spaceflyer at the end of his mission.

An avidsoccer fan by hisown admission, Reiter performed an orbital bicycle kick inside the space station'sDestiny laboratory for the visiting soccer champions.

Reiterwent through his weightless kick slowly as a precaution against damaging the$100 billion space station.

"My bankaccount does not allow me to pay for all the things I can damage here with myfoot," Reiter said.

Reiter alsofollowed the 2006 World Cup - held in his native country of Germany - as bestas he could just before, during and after his July 4launch into space during NASA's STS-121shuttle flight to the ISS last month. He and his fellow Expedition13 and STS-121crewmates took bets on which country - France or Italy - would take theWorld Cup title last month (Italy, chosen by STS-121 astronauts MarkKelly and Lisa Nowak,brought home the win).

FCBarcelona presented the Expedition 13 crew with their own team jerseys, personalizedwith each astronaut's name and the number 13 in honor of their mission.

A delightedVinogradov, Williams, Reiter and ISS flight controllers, meanwhile, presentedFC Barcelona with a photograph of the team's hometown as seen from orbit and aSpanish flag that rode aboard the space shuttle Discovery during its STS-121mission.

"This isreally something special and we will treasure it," said Rijkaard, who invitedthe Expedition 13 crew to his team's hometown stadium in Barcelona where theywould be guests of honor once they return from space.

"Thank youvery much," Williams said. "We'll have to work that into our schedule."