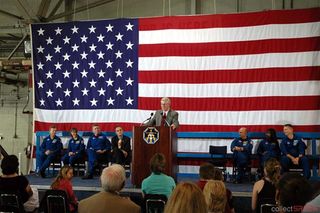 The crew of space shuttle Discovery's recently ended STS-121 mission returned home to Texas on Tuesday, where they were welcomed back by several hundred of their co-workers, friends, family and members of the public. Together inside a hangar at Ellington Field, the crew thanked those who made their flight successful, posed for photographs and gave autographs to their fans.

Half of the six-person crew was delayed while flying from Kennedy Space Center in Florida to Houston as a result of severe thunderstorms over Ellington Field. They were instead diverted to Bush Intercontinental Airport located across town, where they waited for the rain to stop before continuing to their destination.

The situation was reminiscent of their launch at the start of July, when weather twice scrubbed NASA's tries to get Discovery off the ground. In both cases, the short delay proved well worth the time spent.

"I have to tell you, when we launched space shuttle Discovery on July the Fourth, I had a different feeling. I had a feeling of immense overwhelming pride for being part of the space program and being a part of this nation. The beautiful machine was sitting out there against that blue backdrop, beautiful summer sky, and in my opinion, the space shuttle in that moment, more than anything other, symbolized what it is to be an American," Geveden said to a round of applause. "It symbolized our spirit of adventure, it symbolized our technical ability, but I think more importantly it symbolized our collective will. We were returning to flight and we will continue to do what we do in space."

"When we launched, really we as a NASA family, and we as a crew--we had two major objectives," shared the flight's commander, Steven Lindsey.

"The first one was to complete the Return to Flight test objectives that we set out to do and do everything in combination with what STS-114 had done a year earlier; prove the tank hopefully, or at least get a good flight on the tank; develop inspection and repair techniques and do all of that work," said Lindsey of the post-Columbia work intended to safe the shuttle from another accident.

"And our second objective was to get up to space station, get it prepared for assembly, fix some things that were broken, bring the crew back up to three and deliver critical supplies so that we could go to assembly. So with those two objectives, that's what we launched with, and that's what we were all hoping for and praying for. And I think I can safely say, that we accomplished those objectives."

Lindsey emphasized that their mission's success would not have been possible were it not for the support of the mission control teams in Houston .

"Every single minute we were awake and every single minute we were asleep, they flew the mission with us. They were up there with us every day. We were talking to them all the time. I can't count the number of times during the mission that these teams made critical decisions that made the difference between succeeding on a timeline or failing on a timeline. And they just did a superb job."

Breaking with tradition a bit, Lindsey then invited the flight directors that led each part of their mission to the stage. Annette Hasbrook, representing the station team, Steve Stitch, who led both ascent and entry flight control teams, and lead STS-121 shuttle flight director Tony Ceccacci took turns at the mike thanking their teams and the crew.

"Let's just get something out of the way just at the very beginning here: would all the Aggies please join me in a 'whoop'?" asked mission specialist and "spacewalker extraordinaire" Mike Fossum as he took to the podium. A resounding "Whoop!" was returned by the audience, many wearing the maroon colors of Fossum's alma mater, Texas A&M University . "Thank you very much, I've been trying to explain to my crew what that is all about. We're going up hill and this shuttle is rocking and rolling and there is this 'whoop!' coming from the back seat. They get it now."

In addition to Aggies, the crowd included several of the crew's fellow astronauts including the first and last men to walk on the Moon: Neil Armstrong and Harrison Schmitt.

"This has been an exciting time. It's been the realization of nearly a lifelong dream for me from the days we grew up watching Senator Schmitt and his colleagues long ago," said Fossum.

Following Fossum at the microphone were his two fellow rookie astronauts, the two women on the crew, who were in charge of operating the robotic arms during their flight.

"It was a great flight, we had a lot of fun, we did do a lot of challenging robotic operations, and a lot of other things, too. But of course, robotics is something we did almost every day. Stephanie and I, as the 'Robo-Chicks' enjoyed doing those on the space station side," shared Lisa Nowak of her and Stephanie Wilson's tasks on orbit.

Part of their robotic work involved moving a large canister filled with supplies from the shuttle's payload bay to then dock with the space station and back again at the end of the mission. In the time in between, came the large job of transferring the equipment to and from the module.

"We were able to execute [the transfer plan] in large thanks to the Expedition crew on-orbit, the space station crew," said Wilson . "They worked tirelessly during our EVAs and robotics, transferring items and we wouldn't have been able to do it without their hard work. So in addition to [the ground support] team for putting together a wonderful plan, I'd also like to thank Expedition 13. Thanks to Pavel, Jeff and Thomas for their hard, hard work."

No mere stroll in space

"It was very hard because the target was constantly changing, dodging around. New tasks, new techniques, new problems, and ultimately they came up with new solutions," said Piers Sellers, who with Fossum made three spacewalks, of his training team's achievements.

"And don't forget the human material that [they] had to work with: an Aggie who sometimes had to translate for his rather slow, immigrant EVA-1," joked Sellers.

In total, Sellers and Fossum trained for over two years to spend 21.5 hours outside Discovery.

"Mike and I -- me, more than Mike I think -- take full ownership and responsibility for all and any mistakes that were committed during these 21 hours and there were plenty. But no matter what we did or what happened, you guys back there in Houston, you dug us out of our pit and you got us back on track."

"There was one particular call that basically saved [the second spacewalk]," Sellers told the crowd. "When Mike was wrestling with one TUS [trailing umbilical system] that wouldn't fit, and I was wrestling with another one that wouldn't be bolted, my SAFER [emergency jet pack] wanted to fly off and pursue a solo career in space flight. Which was a dream that was eventually realized by my spatula," recounted Sellers with a smile, as he referenced a tool he lost on his third and final excursion outside.

All jokes aside, Sellers concluded by sharing his personal impressions of spacewalking.

"It is a strange and wonderful thing to be barreling around the earth at 5 miles per second and looking at it through just your visor," explained Sellers. "Sunrises and sunsets are like watching a small, soft atomic explosions go off on the horizon and stream through and warm your face every time it happens. Part of me is still up there floating around the world."

"I remembered a line from a World War I poet who said, 'You close your eyes but there are suns beneath your lids,' and that is really is still how I feel," Sellers shared.

"Just one thing I want to add," said Lindsey, just before Johnson Space Center Director Michael Coats prepared to end the event. "[Coats] may not say it, Administrator Mike Griffin may not say it, but in my lowly position here today, I can say that and I think you all believe it, in terms of human space flight and where we are with the shuttle and station program, I'm going to steal a quote from Mark's brother Scott in an interview and say, 'We're back!'"

For photographs from the crew homecoming and other STS-121 Mission Galleries see collectSPACE.com .