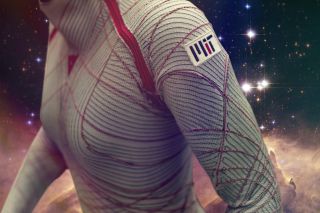 This artist illustration shows a new kind of skintight spacesuit that could help astronauts leave the bulky suits of today behind for more mobility with exploration.
(Image: © Jose-Luis Olivares/MIT)

The spacesuits of the future might be totally alien-looking.

Instead of the bulky-looking spacesuits that astronauts wear today, a group of MIT researchers want to "shrink-wrap" the spaceflyers of tomorrow. Current spacesuits could be replaced by a pressurized but skintight suit that would allow for a much better range of motion during exploration, according to scientists at the Massachusetts Institute of Technology.

"With conventional spacesuits, you're essentially in a balloon of gas that's providing you with the necessary one-third of an atmosphere [of pressure] to keep you alive in the vacuum of space," MIT professor Dava Newman said in a statement. [See more images of MIT's Biosuit design]

"We want to achieve that same pressurization, but through mechanical counterpressure — applying the pressure directly to the skin, thus avoiding the gas pressure altogether," she added. "We combine passive elastics with active materials. … Ultimately, the big advantage is mobility, and a very lightweight suit for planetary exploration."

Newman and her colleagues have designed garments, which can use coils that respond to heat, contracting to a "remembered" state when exposed to the right temperatures. According to the MIT research (which was funded in part by NASA), the coils, when incorporated into a "tourniquet-like cuff," produced the same amount of pressure needed for astronauts to safely work in space.

Now the question is how to incorporate the coils into a spacesuit's design. The suit needs to be  skintight in order to produce enough pressure, but how does an astronaut get in and out of an extremely tight garment?

Scientists can "train" the coils to move into a certain shape when exposed to a specific temperature. When they are not exposed to the temperature, however, the coils can move into a more relaxed state, potentially allowing astronauts to remove the skintight suit.

"These are basically self-closing buckles," MIT's Bradley Holschuh, the designer of the coils, said in the same statement. "Once you put the suit on, you can run a current through all these little features, and the suit will shrink-wrap you, and pull closed."

Scientists also need to find out how to keep the coils at the proper heat so that they stay contracted. There are two options that would help maintain that position for the coils, according to Holschuh. On one hand, engineers would need to run a constant current through the suit to keep the coils contracted. This option, however, presents problems, MIT representatives said.

Constantly heating the suit would use too much energy and also overheat the astronauts inside of it, Holschuh said. Instead, the researchers want to find a way to lock the coils in place once they create the right pressure and release them once the astronaut's work is done.

This applied work could also have implications for other technologies on the ground.

"You could use this as a tourniquet system if someone is bleeding out on the battlefield," Holschuh said. "If your suit happens to have sensors, it could tourniquet you in the event of injury without you even having to think about it."