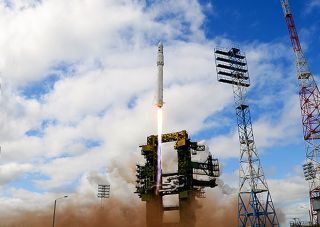 A Russian-built Angara medium-lift rocket launches on its maiden test flight from the Plesetsk Cosmodrome on July 9. 2014.
(Image: © Russian Ministry of Defense)

Russia's recent maiden launch of its new Angara rocket is a harbinger of bigger boosters to come. The successful test flight also marked the country's first new launch vehicle to be built from scratch since the fall of the Soviet Union.

The July 9 suborbital flight of the light-lift Angara 1.2ML rocket lifted off from Russia's Plesetsk Cosmodrome in the country's northern Arkhangelsk region. (The "ML" stands for "maiden launch.")

The test flight, which lasted roughly 21 minutes and was not intended to reach orbit, launched the Angara rocket over Russian territory on a ballistic trajectory. A "mass/dimensional payload simulator" topped the Angara, attached to the rocket's second stage. [Russia's New Angara Rocket in Photos]

That booster ultimately fell back to Earth over a targeted impact area of the Kura Range on the Kamchatka Peninsula over 3,500 miles (5,700 kilometers) from the launch site.

Russia's Angara rockets are being developed by the Khrunichev State Research and Production Space Center in Moscow. The two-stage Angara-1.2ML runs on "ecologically clean components," oxygen and kerosene, according to Khrunichev representatives.

According to Khrunichev, the family of Angara rockets includes a range of light-, medium- and heavy-lift launch vehicles based on generic modules. The modular principle supports the buildup of various launch vehicle classes by using generic boosters: one for the light-lift, three for the medium-lift and five for the heavy-lift.

Russia has deemed the Angara Space Rocket Complex (SRC) one of the priorities in the country's national program to develop launch systems by tapping domestic research and development, along with production potential.

The nation views building the Angara SRC as a task of national importance. When the Angara SRC becomes operational, "Russia will be in a position to launch all types of satellites from its own territory, thereby gaining a guaranteed independent access to outer space," according to a Khrunichev press statement.

According to Russian media, the first heavy-lift Angara 5 booster will rocket off from Plesetsk later this year, possibly at the end of December.

"They've been working on this series of rockets for over 20 years, so in that sense, this is significant … to actually see hardware fly," said Asif Siddiqi, the Charles Lindbergh Chair in Aerospace History at the Smithsonian Institution's National Air and Space Museum. He is also a professor of history at Fordham University in New York.

Siddiqi said that the recent Angara launch's success matters from a symbolic perspective as much as it does from a technical one. The Angara is the first completely new launch vehicle developed by the Russians after the collapse of the Soviet Union, he said.

"That said, there is still a long road to go! This was a modest suborbital flight. They have tested various elements of the Angara on a joint South Korean-Russian rocket, the Naro. Two of the three flights failed, but they got some good data from those missions, too," Siddiqi told Space.com.

The Angara is also significant because Khrunichev is building it, and so that rocket may eventually end up replacing Russia's huge Proton rocket, Siddiqui added. The replacement would be the Angara 5 or an Angara 5 variant, he said.

"The Proton is also basically built by Khrunichev, so if they manage to bring uprated Angara rockets online in the next few years, it keeps Khrunichev in the launch business for the long term," Siddiqi said. [Photos: Russia's Amazing Rockets]

Asked whether the Angara can be tied to some sort of revitalization of Russia's long-terms space interests, Siddiqi responded: "There are signs that Russia's space program is on the upswing, principally shown by increasing budget allocations. But the real evidence for that will be in the next five to eight years during which they will have new launch vehicles, Angara, etc.; a new launch site, Vostochny; a new manned spacecraft called PTKNP; and new planetary missions. The Angara suborbital launch is a small piece in the puzzle, but the real test will in the next few years."

"The Angara program has been a long time in coming, but seems finally to be reaching fruition," Smith told Space.com.

If the Angara 5 test goes as well as the upcoming Angara-1.2PP test, "it could be a big step forward in getting Russia out of its current launch vehicle doldrums," Smith said. (The "PP" in Angara-1.2PP stands for "pervyy polyot," meaning first flight.)

But Smith noted that the Angara 5 rocket test will be completely different from the recent Angara-1.2PP, because the 5's booster will attempt to demonstrate a launch to geostationary orbit, not just a suborbital hop.

"Getting to GEO is tough enough under any circumstances, but launching from so far north is obviously more challenging," Smith said. "What trajectory it will follow to avoid overflying populated areas hasn't been publicly announced yet."

Smith said that if the Russians decide to build the larger versions of Angara (80- and 160-tons), that would, indeed, signal some level of commitment to a robust space future.

"But it is far from clear if they will follow through with those" plans, Smith said. "How much of what is being published right now reflects reality and how much is just wishful thinking is an open question."

Does Russia have the technical talent to pull off new booster work?

Smith responded by observing that outsiders seem to have forgotten about the Energia rocket that flew relatively successful missions twice in the late 1980s. The amount of talk regarding Russia's failed N-1 moon rocket program seems to suggest that this was the last heavy booster the country built.

Energia fell victim, Smith said, to slashes in the space budget as the Soviet Union collapsed, but that rocket lives on in the RD-180 engines used for Atlas 5 and in the Zenit boosters, which were also going to be used as strap-ons for Energia.

"There is no reason to think they don't have the talent needed to build new rockets," Smith said. "But the rocket business can be a heartbreaker for anyone, so let's just see how the December test goes."

Leonard David has been reporting on the space industry for more than five decades. He is former director of research for the National Commission on Space and is co-author of Buzz Aldrin's 2013 book "Mission to Mars – My Vision for Space Exploration" published by National Geographic. Follow us @Spacedotcom, Facebook and Google+. Original story on Space.com.