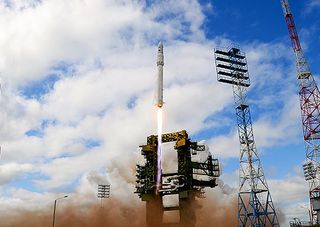 Russia's first Angara rocket launches on its first test flight from the country's Plesetsk Cosmodrome on July 9, 2014. The mission launched a dummy payload into orbit during the demonstration flight.
(Image: © Russian Ministry of Defense)

Russia's new Angara rocket has taken to the skies for the first time.

The Angara rocket — which Russia has been developing for more than 20 years — blasted off from Plesetsk Cosmodrome in northwestern Russia Wednesday (July 9) at 4:00 p.m. local time (8:00 a.m. EDT; 1200 GMT), carrying a dummy payload on its maiden flight. The mission was a suborbital test launch only, and did not carry its payload all the way into orbit.

Everything seems to have gone according to plan, launch officials said.

"Stage 1 and the fairing were released into a planned targeted area in the southern part of the Barents Sea," representatives with International Launch Services (ILS), a U.S.-Russian firm that holds the rights to market Angara to commercial customers, wrote in an update Wednesday. The rocket is built for Russia by the aerospace company Khrunichev State Research and Production Space Center.

"After 21 minutes and 28 seconds, Stage 2 and the firmly attached mass/dimensional payload simulator reached the planned targeted area of the Kura Range on the Kamchatka Peninsula, 5,700 km from the launch site," they added.

The suborbital test flight of the two-stage rocket was originally scheduled for June 27. But automated control systems detected a problem of some sort during the final countdown, forcing a scrub and ensuing delay.

Angara is the first new rocket Russia has designed and built since the fall of the Soviet Union in the early 1990s. The vehicle's parts and components are all homegrown.

Russian officials hope the Angara rocket family — which includes small, medium-size and heavy-lift vehicles, all based on generic modules — will help secure the nation's access to space.

"The Angara family will have the capacity to launch virtually the entire range of would-be payloads to orbits of the entire range of altitudes and inclinations including geostationary orbits, affording true independence to domestic space programs," ILS representatives wrote.

Along these same lines, Angara is designed to blast off from Plesetsk and Vostochny Cosmodrome, a facility under construction in the Russian Far East. Russia wants to reduce its reliance on Kazakhstan's Baikonur Cosmodrome, which it has had to rent out since the Soviet Union's collapse.