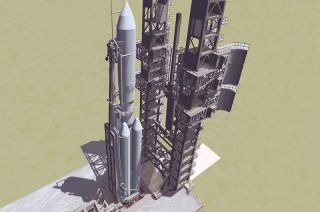 A glitch has forced Russia to postpone today's (June 27) highly anticipated first flight of its new Angara rocket, according to media reports.

The Angara was scheduled to blast off today from Plesetsk Cosmodrome in northwestern Russia, but automated control systems detected a problem of some sort and aborted the launch during the final countdown, the news agency Reuters reported. The launch has been delayed by at least 24 hours.

Russia has been working on the Angara rocket for more than 20 years, with the goal of securing the nation's access to space with a truly homegrown rocket.

"This is the first launch vehicle that has been developed and built from scratch in Russia," said Igor Lissov, an expert with the trade journal Novosti Kosmonovatiki, according to Reuters. "Everything else we have is a modernization of our Soviet legacy."

Angara is designed to lift off from Plesetsk as well as Vostochny Cosmodrome, a facility now under construction in the Russian Far East. Russia wants to reduce its dependence on Kazakhstan's Baikonur Cosmodrome, currently the site of all of the nation's manned space launches and many of its unmanned efforts. (Russia has had to rent Baikonur since the Soviet Union dissolved in the early 1990s.)