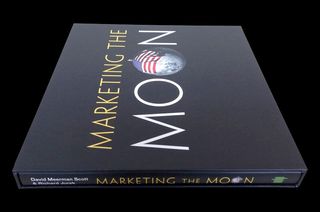 In "Marketing the Moon: The Selling of the Apollo Lunar Program" co-authors David Meerman Scott and Richard Jurek reveal how NASA built its case to send astronauts to the moon.
(Image: © WebInkNow/collectSPACE.com)

At an upcoming space artifact auction, among the selection of astronauts' autographs, spacecraft parts and mission patches, is a 45-year-old press kit from the 1969 Apollo 11 moon landing. Its 250 pages browned with age, it isn't the auction's star lot, but it still could bring in hundreds of dollars.

As memorabilia of the lunar landings, the documents and other materials originally created to sell the public on the idea of sending astronauts to the moon are now on sale as prized collectibles.

But as valuable as the press kits, pamphlets, posters and other ephemera might be on the collector's market today, their significance as a shining example of effective brand marketing may be their true worth. [Interview: Marketing The Moon]

That's the case laid out — both figuratively and literally — by David Meerman Scott and Richard Jurek in "Marketing the Moon" (MIT Press, 2014), a richly-illustrated, engaging coffee-table-style book covering why the secret to NASA's Apollo success was not just its astronauts, engineers and scientists, but also the public relations officers who helped to make "landing a man on the moon and returning him safely to Earth" more than just a political tagline.

"Marketing the moon was a huge success," says Scott, a marketing strategist and bestselling author who notes he's not related to the Apollo astronaut of the similar name. "To deliver 24 men to the moon – 12 of whom ventured to its surface – with 1960s technology, is even more remarkable from our vantage point four decades later. It was a huge project."

"That America spent an average of 3.3 percent of the federal budget on NASA during the peak years from 1963 to 1969, a period when the Vietnam War was in full swing, made the Apollo program not only a remarkable political and technological accomplishment, but also an amazing global marketing and public relations achievement," Scott says.

The story of Apollo has been told many times over, but the angle that Scott and Jurek embraced to their retelling is unique. The two combined their professional experience with their personal passion, collecting space memorabilia — and in particular examples of Apollo-era marketing— to deliver a fresh take on the four decade old quest.

"After years of collecting this material, and lamenting that no book had been written about the subject, we decided to do it ourselves," Jurek, a marketing executive, explains. "We had a literal blast researching and writing the book, and spending hours and hours talking to former NASA public affairs office legends, as well as former contractor marketers and the astronauts themselves — talking about and listening to stories we'd never heard before, because no one had ever asked about them."

"And that was our goal for the book, not to rehash material that had been discussed before, but to truly uncover those unique and wonderful stories that could bring to life this overlooked aspect of Apollo," Jurek says.

Even if you're not a marketing professional, "Marketing the Moon" is a visual treat. The authors included almost 300 illustrations, curated down from an initial collection of over 3,000.

"Many have never been published before," Jurek says of the book's images. "And the effect, with the narrative, the illustrations, and the sidebars, is that of having a museum exhibit in one's hand. That was [also] one of our goals and I think we achieved that."

Click through to collectSPACE.com to continue reading an interview with co-authors David Meerman Scott and Richard Jurek about "Marketing the Moon."

"Marketing the Moon: The Selling of the Apollo Lunar Program" by David Meerman Scott and Richard Jurek was published by MIT Press in Feb. 2014.