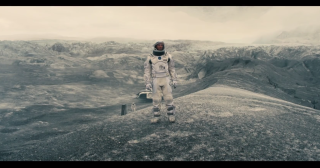 A screengrab from the new 'Interstellar' trailer. The film is due to come out in November 2014.
(Image: © Paramount Pictures)

A new trailer for the movie "Interstellar" hit the Internet today, revealing more about the film's largely unknown plot.

Earth appears to be in bad shape in the new movie from "Inception" director Christopher Nolan. "We used to look up at the sky and wonder at our place in the stars, now we just look down and worry about our place in the dirt," Cooper (played by Matthew McConaughey) says in voiceover at the beginning of the new "Interstellar" trailer. The 2.5-minute video then takes viewers on journey with Cooper that includes watching him blast off with a crew of astronauts on a journey into space to save humanity.

It seems as though the astronauts are on a mission to find a habitable alien planet by diving headlong into a wormhole — a theoretical passageway in space-time that could transport matter from one part of the universe to another. The screenplay is based partially on the work of Kip Thorne, a California Institute of Technology physicist who has developed theories about wormholes. Cooper and the other astronauts (including one played by Anne Hathaway) seem to explore other worlds — including a watery planet and an icy one — in the trailer. The end of the trailer features Michael Caine's character (simply called "professor" by Cooper) reading the first verse of Dylan Thomas' "Do Not Go Gentle Into That Good Night" — a poem about resisting death.

Watch the trailer through the "Interstellar" website: http://www.interstellarmovie.com/. "Interstellar," is expected to hit theaters nationwide on November 7.