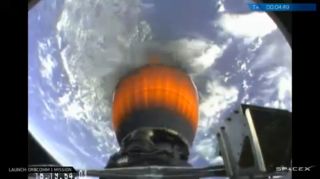 The commercial spaceflight company SpaceX successfully launched six Orbcomm OG2 satellites into orbit aboard its Falcon 9 rocket on Monday, July 14, 2014. This view shows the Earth as seen from space by a camera riding aboard the Falcon 9 rocket.
(Image: © SpaceX)

The commercial spaceflight company SpaceX returned part of its Falcon 9 rocket back to Earth after a successful satellite launch Monday (July 14) in a reusability test that did not go entirely as planned after the booster splashed down in the Atlantic Ocean.

"Rocket booster reentry, landing burn & leg deploy were good, but lost hull integrity right after splashdown (aka kaboom)," SpaceX's billionaire founder and CEO Elon Musk wrote in a Twitter post. "Detailed review of rocket telemetry needed to tell if [it was] due to initial splashdown or subsequent tip over and body slam."

SpaceX had hoped to bring the Falcon 9's first stage down in a soft Atlantic Ocean splashdown, then fish the booster out of the ocean with a recovery boat. The reusable rocket test took place after the company's smooth launch of six spacecraft for the satellite-communications firm Orbcomm from Florida's Cape Canaveral Air Force Station.

Musk's Twitter statements suggest that, aside from the breakup of the first stage after splashdown, the rest of the reusability rocket test performed as expected. [The Rockets and Spaceships of SpaceX (Photos)]

Developing fully and rapidly reusable rockets is a key priority for SpaceX and Musk, who has said that such innovative launcher technology could cut the cost of spaceflight by a factor of 100. Musk believes that reusable rockets could open up the solar system to manned exploration, perhaps even making a Mars colony economically feasible.

SpaceX has been working on several different projects to help make this happen. For example, over the past two years or so, the Hawthorne, California-based company flew a reusable prototype called Grasshopper on a series of increasingly complicated flights from its Texas test facility.

The company has ramped up those efforts with the Falcon 9 recently. SpaceX first attempted a first-stage Falcon 9 return last September, during the launch of Canada's CASSIOPE space-weather satellite from Vandenberg Air Force Base in California. The company managed to re-light the rocket's first stage twice during that trial, but the stage eventually spun out of control and hit the water hard.

To help combat the spin problem, SpaceX engineers put landing legs on the Falcon 9 before another reusability test in April 2014. That trial came during the launch of SpaceX's robotic Dragon cargo capsule from Cape Canaveral, and it marked a significant improvement. Data showed that the rocket stage did indeed make a soft splashdown, landing upright in the water, though rough seas broke it apart before the recovery boat could get to it.

"If all goes well, I'm optimistic that we'll be able to land a stage back at Cape Canaveral by the end of the year," Musk told reporters in April, after the Dragon launch. "Assuming that happens, we should be able to re-fly the main boost stage sometime next year."