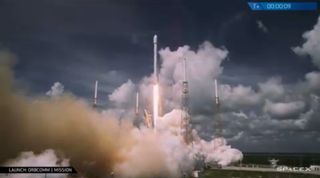 The private spaceflight company SpaceX launched six commercial satellites into low-Earth orbit today (July 14) in a mission that was expected to include a key rocket-reusability test.

The satellites are the first members of the OG2 (short for "ORBCOMM Generation 2") constellation, which should provide a big upgrade over the current OG1 network, company officials said. SpaceX is expected to launch a total of 17 OG2 craft using the Falcon 9. [See photos of the SpaceX launch]

The OG2 satellites, which weigh about 375 lbs. (170 kilograms) each, were built by Sierra Nevada Corp. They're destined for an elliptical orbit that will take them between 382 and 466 miles (615 to 750 kilometers) above Earth's surface.

A successful delivery of the OG2 satellites may have been the main objective of Monday's launch, but it wasn't the only one. SpaceX also aimed to bring the Falcon 9's first stage back to Earth in a soft ocean-splashdown, to test out and advance reusable-rocket technology. It was not clear immediately after liftoff how well this test went.

Developing fully and rapidly reusable launch vehicles is a key priority of SpaceX's billionaire founder Elon Musk, who has said that this breakthrough could slash the cost of spaceflight by a factor of 100. In doing so, reusable rockets could help open the solar system for manned exploration, perhaps even making a Mars colony economically feasible.

SpaceX attempted a similar first-stage return during the last Falcon 9 liftoff in April, which blasted the robotic Dragon capsule toward the International Space Station on a cargo mission for NASA. That test went well; data showed that the rocket stage did indeed make a controlled landing in the Atlantic Ocean, though rough seas destroyed it before recovery boats could reach the splashdown scene.

Monday's launch was originally planned for May 10, but the cancellation of a pre-launch Falcon 9 static-fire test and scheduling constraints pushed the liftoff back by about two months. The launch also comes on the heels of SpaceX receiving certification from the U.S. Air Force of its Falcon 9 rocket after three successful flights, a major step in the company's plan to compete for U.S. military satellite launch contracts.