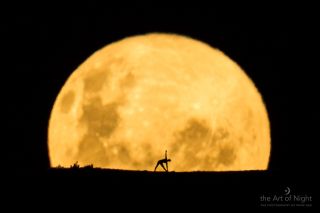 The image of the full " Honey Moon" of June was taken by astrophotographer Mark Gee on June 13, 2014 from Maupuia Park in Wellington, New Zealand. A friend of Gee's is seen in silhouette practicing yoga.
(Image: © Mark Gee | The Art of Night)

The image was taken by astrophotographer Mark Gee on June 13, 2014 from Maupuia Park in Wellington, New Zealand. It's a single exposure photograph shot with a 600mm lens plus a 1.4x extender.

"Friday the 13th and a rare 'honey' moon rises. This event won't happen again until 13 October 2049, so I thought this would be the perfect opportunity to capture a friend of mine practicing some yoga in front of the moonrise," Gee wrote on his website. [Spooky 'Honey' Moon Casts Glow on Friday the 13th (Photos )]

When the first of the month is a Sunday, the month also has a Friday the 13th. This follows "Pelletier's Law," named after stargazer Leslie C. Peltier. On average, a full moon falls on Friday the 13th about once about every 14.3 years.

The "honey moon," or strawberry moon, is named after its amber-reddish color. During this time of year, the moon is at one of its farthest points south. Because of its low location, the moon shines through the thick layers of atmosphere near the horizon, sometimes making it appear to have a golden glow.