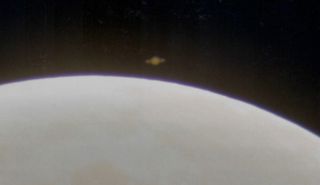 Victor Rogus is an amateur astronomer, and this is the fifth in his series of exclusive Space.com posts about amateur astronomy. He contributed this article to Space.com's Expert Voices: Op-Ed & Insights.

The morning of Sept. 18, 1997, I made a special effort to try and document the occultation of the planet Saturn. This event was a rather rare one, an occurrence that I had looked forward to with great anticipation. Saturn's disappearance behind the lunar disk occurs once in an approximately 18-year cycle. That is, the occultation can be seen from somewhere from the Earth once or twice in a year, then not again for about 18 years.

The next such event will occur in just a few days. On May 14, 2014, at 10:15 UT, observers in New Zealand and Australia will be treated to the best views on planet Earth of this amazing spectacle. May they enjoy clear skies!

Before 1997, I had seen pictures in books depicting the occultation and admired them greatly. On that crisp September morning, I got a chance to add a similar photograph to my own portfolio. Of course, as luck would have it, that was a workday, and I was very busy at the custom tool and machine shop. My absence would be sorely felt, and my conscience would have bothered me had I allowed my fellow workers to carry my burden. This is one of the downfalls of working in a business owned by your own family.

Actually, I resist using the word "hobby" to describe this activity, as it is truly much more than just a way to pass the time. It's a way of life, and when lived to its fullest extreme, an art form, the kind that requires sacrifice, hard work and devotion. Sometimes showing up for work bone tired is part of it. Eat a big breakfast, consume much strong coffee, tough it up and you will survive — better than that, with a little luck you may have captured an amazing image! Be prepared to suffer for your art if you are to do your best; the workings of the cosmos wait for no man.The best piece of advice I can give is: Be where you need to be at the right time with your best equipment with a well thought-out, organized plan — and ignore those voices, internal or external, telling you to quit.

In 1997, the occultation was to occur at 5:56 a.m. local time, and I was supposed to be at work at 6:00 a.m. Fortunately, Saturn was quite bright (magnitude 0.2 at that time), and the moon was only one day past the full phase, so I would not need to make a trip to the dark countryside to photograph the event. I would need, however, an open, western horizon — and of course, clear skies. The weather looked promising, as a high-pressure system had a firm hold on the central United States.

Considering my options for a western horizon free of obstruction, I realized my brother's backyard made a good candidate. A brief inspection of his premises on the previous night confirmed my opinion. His backyard adjoined a middle school's sports field and offered a fair view to the west. He lived in Wheeling, Illinois, only a few miles from my home, and it was close to the shop where we worked together. If I set up my equipment in his backyard or on the sports field, I could photograph the occultation, disassemble everything and be at work no more than an hour late. (My conscience could live with that.) I told him I would be at his house at around 2:30 a.m. to select the perfect spot, erect my telescope and to polar-align its mount. Planetary imaging can be a tricky business, and there would be very little time to capture Saturn and the moon in close conjunction. With the overpowering brightness of the full moon in the field, the exposure time estimate would be critical. [Milky Way Galaxy Plus Saturn Equals Magical Night for Stargazer (Photos ) ]

I intended to photograph through my 5-inch f9 apochromatic refractor at 114x power using the eyepiece projection method, which increased magnification of an object by placing an eyepiece between the objective lens of the telescope and the camera I had chosen fine-grain 100-asa Kodak Ektachrome slide film for this event. I must admit, I was one of the last to give up my beloved collection of film cameras. This was a difficult transition for me, but now, my new love is my digital Cannon 60Da, 18 megapixel DSLR camera. Sometimes I wonder how I got along without it. Back in the day, I processed my own black and white images as well as E-6 color slide film, waiting patiently for the results from my outings. Now, making exposure adjustments and seeing results right there in the field seems to me heaven sent!

At 2:30 a.m. sharp, I arrived at my brother's house. Like the good host, he was awake with coffee brewing and even had his own telescope, a great Dobsonian, set up in anticipation of the rare event to come. The neighbor's dog, Sterling, barked constantly as I readied my equipment in the cool, autumn air. The landscape was awash with glowing moonlight as proud Luna and mighty Saturn paired off in the heavens above. My brother and I drank strong black coffee and tracked the beautiful ringed planet as its apparent distance from the moon ever decreased and the two bodies crept across the early morning sky. Sterling, it seems, never grew weary of warning the neighborhood of the astronomers at work studying this celestial ballet.

In the few critical minutes proceeding the occultation moment, when the moon overtook the great ringed planet, temporarily hiding it from view, I furiously made exposures widely bracketing both objects. Soon after, the celestial pair was in close conjunction, and through our stinging eyes, my brother and I marveled at the amazingly beautiful sight visible in our telescopes' eyepieces and through my camera's back. Then the alarm on my wristwatch sounded the one-minute warning until occultation. The bright glare of moonlight began to erode the saturnine image, and then suddenly, the planet was gone, hidden from view and obscured by the lunar surface.

From our latitude, Saturn would not reappear until 6:29 a.m. It would be daylight, and the objects of our desire would be, by then, hidden in the branches and limbs of the trees. One last gulp of cold coffee, and we began to carefully disassemble our equipment. My brother stashed his telescope in his garage, and I loaded mine in my truck. For us, the event was history, and we drove off to work. That evening in my darkroom, I carefully processed my roll of slide film, and I was very pleased to find that the four-second-exposure time yielded some fine results, although the moon was, by necessity, a bit overexposed. Overall, though, I thought, not bad for a work night and a rough day on the job.

Space.com is hosting a slideshow of Rogus' images.

Rogus' most recent Op-Ed was "When the Sun Blinked: 1994's Solar Eclipse (Op-Ed)." Follow all of the Expert Voices issues and debates — and become part of the discussion — on Facebook, Twitter and Google+. The views expressed are those of the author and do not necessarily reflect the views of the publisher. This version of the article was originally published on Space.com.