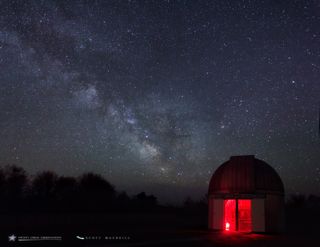 A night of stargazing in Rhode Island proved to be quite magical for one night sky photographer.

Astrophotographer Scott MacNeill of Frosty Drew Observatory in Charlestown, Rhode Island, captured these images of the bright Sagittarius Arms and galactic center of the Milky Way on May 3.

"After a stretch of cloudy nights, skies cleared at just the right time to catch the return of the summer Milky Way to our skies," MacNeill wrote in an email to Space.com. "We had some haze overhead and some minimal air-glow though the skies were to die for." [Amazing Night Sky Photos (May 2014)]

The same day he was able to capture the observatory's first view of Saturn for the 2014 observing season. The image showcases the increased axial tilt of the planet with a defined Cassini Division. The Cassini Division is the large gap between the two most prominent of Saturn's rings — Rings B and A — caused by the gravitational pull of the moon Mimas.