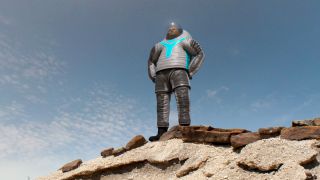 NASA's next-generation spacesuit is really coming together, with a little help from the public.

The cover layer option dubbed "Technology" won the spacesuit design challenge with 147,354 votes, or just over 63 percent of the total ballots cast, NASA officials said. The other two choices — "Biomimicry" and "Trends in Society" — received 53,057 and 33,020 votes, respectively.

The newly selected cover layer now becomes part of the Z-2, which should be fully constructed and ready to be tested by November, officials said.

That extensive testing campaign won't prepare the Z-2 for spaceflight, however. The Z-series spacesuit line is still in the prototype phase, seeking to advance and develop technologies that will allow astronauts to amble about on the surface of Mars someday. So whatever NASA learns about the Z-2 will inform the design of the next iteration, the Z-3.

The Z-2, for example, features some key improvements over the Z-1 spacesuit, which was named one of Time Magazine's best inventions in 2012. The Z-2's hard upper torso makes it more durable, officials said, and the suit uses materials designed to function well in the vacuum of space.

"The cover layer of a non-flight suit still performs an important function in ground-based testing. The cover protects the lower layers and technical details from abrasion and snags during testing," NASA officials wrote in a press release today.

"The cover layer on flight suits used for spacewalks performs many other important functions like protecting the spacewalker from micrometeorite strikes, the extreme temperatures in space and the harmful effects of radiation," they added. "These requirements drive selection of specific high-performance materials and design details that aren’t necessary at this stage in a prototype suit."