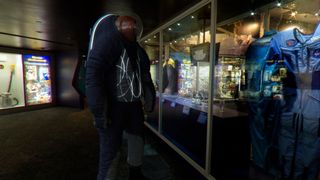 NASA's "Biomimicry" Z-2 spacesuit design, one of three different concepts, draws from an environment with many parallels to the harshness of space: the world's oceans. Mirroring the bioluminescent qualities of aquatic creatures found at incredible depths, and the scaly skin of fish and reptiles found across the globe, this design reflects the qualities that protect some of Earth's toughest creatures.
(Image: © NASA Advanced Concepts Lab - POC: Alberto Bertolin)

NASA wants your help to put the finishing touches on its new spacesuit.

The space agency is asking the public to select the "cover layer" for its prototype Z-2 spacesuit — a 21st-century astronaut suit that looks like it's one part Buzz Lightyear and one part "Tron." The first Z-2 spacesuit should be completed by November.

There are three spacesuit design options to vote for: "Biomimicry," which draws inspiration from the bioluminescent creatures that dwell deep in Earth's oceans; the starker and more futuristic-leaning "Technology;" and "Trends in Society," which aims to represent what everyday clothes will look like in the near future. All three designs incorporate glowing light-up segments. [See photos of NASA's advanced Z-2 spacesuit design concepts]

"The cover layer of a prototype suit is important as it serves to protect the suit against abrasion and snags during the rigors of testing," project officials wrote in an online description of the Z-2 design voting plan. "With the Z-2, we're looking forward to employing cover layer design elements never used in a spacesuit before."

The Z-2 is the latest design in NASA's next-generation line of spacesuits, which is known as the Z-series. The previous iteration, the Z-1 spacesuit, was named one of Time Magazine's best inventions in 2012.

While the Z-series is being developed to fly in space, no suits in the line are ready to do so yet. When it's finished and built, the Z-2 will undergo a battery of tests that assess its off-Earth readiness.

"We will be conducting multiple vacuum chamber tests, including one series at full vacuum, mimicking the lack of atmosphere found in outer space," NASA officials wrote. "The suit will be tested at the Neutral Buoyancy Lab (NBL), the huge indoor pool NASA uses to train every astronaut in the technique of spacewalking. Further testing at a rocky Martian surface analog site at the Johnson Space Center along with other settings will help us evaluate mobility, comfort and performance of the suit."

The results of these trials will guide engineers as they design the next suit in the Z-series.

To see the designs and vote for your favorite, go to http://jscfeatures.jsc.nasa.gov/z2/. Voting is open through April 15.