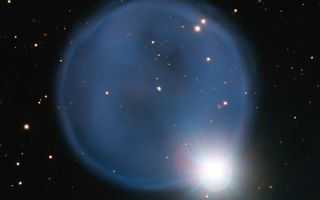 Astronomers using ESO’s Very Large Telescope in Chile have captured this eye-catching space wallpaper of planetary nebula Abell 33. Created when an aging star blew off its outer layers, this beautiful blue bubble is, by chance, aligned with a foreground star, and bears an uncanny resemblance to a diamond engagement ring. This cosmic gem is unusually symmetric, appearing to be almost perfectly circular on the sky. This image was released April 9, 2014.