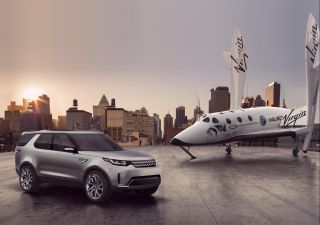 Land Rover will keep a group of vehicles at Virgin Galactic's test center in California and at Spaceport America in New Mexico. Virgin Galactic and Land Rover also teamed up to produce a video announcing the new partnership.

A full-scale model of Virgin Galactic's suborbital space plane, SpaceShipTwo, stands next to warplanes on the deck of an aircraft carrier turned museum in a display honoring the new partnership. The SpaceShipTwo model will only stay on board the Intrepid Sea, Air & Space Museum here in New York City until the end of today (April 23). However, the partnership between the two companies is built to last. [See photos from SpaceShipTwo's test flights]

"We built it [the SpaceShipTwo model] and had shown it off in the U.K. a little bit, and I think it has been to one or two other places," Will Pomerantz, the vice president of special projects with Virgin Galactic, told Space.com. "We'll eventually do a little bit of a road show."

The model was unveiled next to Land Rover's Discovery Vision Concept vehicle on the deck of the Intrepid during an event last week. The new concept SUV uses gesture control to open doors, turn on headlights and operate indicators, according to Land Rover. The car also uses specialized technology to make the front of the car appear "invisible" from the inside, Land Rover representatives said.

The more than 700 people who have paid for tickets aboard a SpaceShipTwo flight should get the chance to ride in a Land Rover as well.

"The partnership will see Land Rover vehicles become part of daily life for the Virgin Galactic team," Virgin Galactic representatives wrote in a statement. "And for all 'Future Astronauts,' the space experience will now begin with Land Rover as they arrive in New Mexico for training, and continue to the moment they drive from the space terminal building to the waiting spaceship."

SpaceShipTwo is expected to fly its first commercial flight sometime later this year. At the moment, the space plane is in its final stages of testing. Virgin Galactic's billionaire founder, Sir Richard Branson, will be one of the first passengers to fly aboard SpaceShipTwo.

A ride on SpaceShipTwo currently costs $250,000. Passengers that fly aboard the space plane  will experience a few minutes of weightlessness and view Earth from the blackness of space.