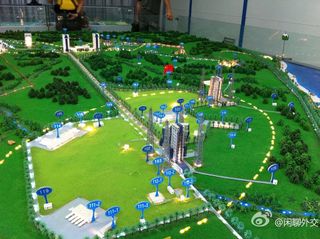 Sprawling spaceport on Hainan Island is shown in this model of the complex.
(Image: © China Space Website)

China's huge new rocket is headed toward its maiden flight from the country's soon-to-be-complete, brand-new launch center on Hainan Island, at the southern tip of China, far from the nation's mainland.

The combination of the planned rocket, called the Long March 5 — and its derivatives — matched with the Wenchang Launch Center, China's new sprawling spaceport, underscores the country's shifting space gears. It enables China's space station ambitions, while also boosting the nation's plans for interplanetary exploration, as well as accomplishing human treks to the moon.

The new launch facility is extremely important to the future of China's space program, said Gregory Kulacki, senior analyst and China project manager for the Global Security Program at the Union of Concerned Scientists (UCS), based in Cambridge, Mass. [See photos of China's planned space station]

"Not only because of the significantly increased capacity of the new series of wider-bodied rockets that will be launched from there, but because of the changes in Chinese space culture the new facility represents," Kulacki told Space.com.

Kulacki has lived and worked in China for the better part of the last 25 years, facilitating exchanges between academic, governmental and professional organizations in both countries.

In a post last year on the UCS's "All Things Nuclear — Insights on Science and Security" website, Kulacki took a hard look at China’s new blue water spaceport. He said that China's existing spaceports were constructed during a more defensive era when outer space was perceived as the ultimate high ground of the Cold War.

"While some observers may continue to see space as an arena for great power competition, many Chinese space professionals hope to expand international cooperation and collaboration," Kulacki wrote.

"Diverse civil, scientific and commercial space aspirations occupy the imaginations of China's young and rapidly growing space community," Kulacki added. "Military competition remains important, but it may no longer be paramount. Plans for the new spaceport in Hainan embody this change."

Kulacki wrote that the island, occasionally referred to as "China’s Hawaii," is well-suited for a space port.

"The facility is being built on the relatively undeveloped northeastern corner of the island in the municipality of Wenchang," Kulacki said. "But instead of preserving or reinforcing the launch site's relative isolation, the city planners are working hard to integrate the space port into the island's tourist infrastructure."

In addition to the island's launch facilities, the spaceport will be surrounded by 37 different development projects, Kulacki said, including a space-related theme park.

"Roads and other supporting infrastructure are being designed to accommodate two populations," Kulacki said. "The space professionals who will be living and working at what appears to be China's equivalent of the Kennedy Space Center, and affluent Chinese looking to take in a space launch while enjoying a vacation at the beach."

Final piece of the puzzle

“Their willingness to keep at it is also indicative of China’s persistence and will to be an enduring space power,” Johnson-Freese told Space.com. "Having an operational heavy lift launch vehicle is perhaps the most important final piece of the puzzle of hardware requirements necessary to achieve their three-part human spaceflight program laid out in 1993 … as without it they are unable to launch the large space station that has always been the ultimate programmatic goal.”

Johnson-Freese added that it also then gives China options for the future, such as interplanetary space travel, and a human mission to the moon.

Pushing up against deadlines

"The launch of the Long March 5 series will open new possibilities for China's space program," said Dean Cheng, a research fellow on Chinese political and security affairs at the Heritage Foundation in Washington, D.C. "In the first place, it will allow for the orbiting of the Tiangong-2 spacelab, which is slated to go up in 2015." [Read more about China's space program]

The booster is also going to be an essential vehicle for the eventual Chinese space station, sometimes referred to as Tiangong-3, Cheng told Space.com. It will also be necessary for the next generation of Chinese all-weather, high-resolution observation satellites, which are believed to be much larger than the Ziyuan series, he said.

Cheng noted that, given the projected launch in 2015 of the Tiangong-2 and China's 2020 space station, the Long March 5 development timeframe is pushing up against deadlines.

Long March 5 is the largest rocket that China has ever built, with a 5.2-meter diameter. "That poses significant challenges to China’s manufacturing capability, especially as this is being built at a new production site," Cheng said.

Tyranny of their railroads

Regarding China's new launch site, Cheng said it frees China's space program from the tyranny of their railroads: "Now, launch vehicles will no longer be limited by the curvature of rail lines and width of train tunnels."

Cheng added that the launch complex being located on Hainan Island is another reason for China’s focus on the South China Sea.

Hainan is beginning to look like the Soviet Kola Peninsula during the Cold War, Cheng said, given major naval facilities, including submarine pens dug into cliff sides, as well as a carrier facility and air bases, and now a space launch facility.

"China's intention of dominating the South China Sea, the source of so much recent tension, is likely driven in part by the desire to keep foreign militaries far away from this densely militarized territory," Cheng said.