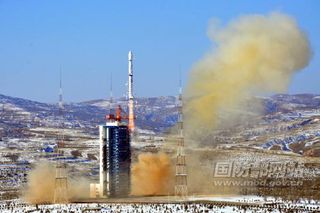 The Long March 4B launcher lifted off at 0317 GMT Monday (10:17 p.m. EST Sunday) from the Taiyuan space center in Shanxi province, according to the state-run Xinhua news agency.

The 15-story rocket and the Ziyuan 3 satellite achieved orbit about 12 minutes later. The rocket's upper stage injected the craft into an orbit more than 300 miles high with an inclination of 97.5 degrees. [12 Space Missions to Watch in 2012]

Developed and built by the China Academy of Space Technology, the 5,842-pound satellite carries an electro-optical imaging payload comprising three pointing forward, down and aft. The ground-facing camera has a resolution of 2.5 meters, or 8.2 feet.

The satellite is devoted to civil applications, according to Xinhua.

The rocket also orbited VesselSat 2, a 63-pound satellite designed to relay positions of ships around the world. Constructed by LuxSpace of Luxembourg, the spacecraft's services will supplement Orbcomm's next-generation communications satellites due to begin launching this year.

Monday's mission was the first space launch worldwide in 2012.