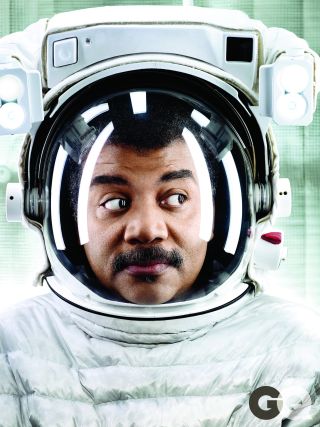 It's hard to imagine the late astronomer Carl Sagan gracing the glossy pages of GQ wearing one of his turtlenecks and corduroy blazers.

It's a different story for the men who are launching a stylish reboot of Sagan's beloved "Cosmos" TV series this weekend.

Host Neil deGrasse Tyson and executive producer Seth MacFarlane are featured in a photo spread in GQ magazine this month as buzz builds for Sunday's premiere.

Tyson, for his part, offers his characteristic (and subtly mind-blowing) humor.

"The universe is hilarious!" the astrophysicist told GQ. "Like, Venus is 900 degrees. I could tell you it melts lead. But that's not as fun as saying, 'You can cook a pizza on the windowsill in nine seconds.' And next time my fans eat pizza, they're thinking of Venus!"