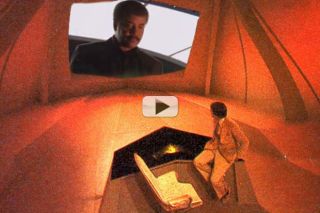 NEW YORK — The new TV show "Cosmos" isn't just for science nerds and space geeks. The show is designed to reach everyone with its broad, visually stunning approach to science, according to the program's producers.

"Cosmos: A Spacetime Odyssey," is a relaunch of Carl Sagan's classic "Cosmos: A Personal Voyage." The new Cosmos series premieres Sunday (March 9), and the creators of the show, hosted by astrophysicist Neil deGrasse Tyson, hope that it will reach a wide audience like the Sagan's "Cosmos" did during its run in 1980.

"We wanted to reach everyone because we believed that this knowledge is a birthright," Ann Druyan, Sagan's widow and a co-writer of the new show, said of the first "Cosmos" series during a webcast here at the Hayden Planetarium Tuesday (March 4). "It belongs to all of us." [Watch the trailer for the new "Cosmos" series]

"You want to reach the Kardashians," executive producer Seth MacFarlane joked, referring to the reality TV family, during the premiere event.

"Cosmos: A Spacetime Odyssey" uses animation and virtual effects — including a unique spaceship which Tyson travels on — to create an immersive TV experience. The first episode even dives into a bit of science history.

"That's what we wanted to preserve, the idea that this is certainly educational and inspiring, but that it would have a certain P.T. Barnum element as well, which the original 'Cosmos' had in an immense way," MacFarlane said. "Particularly for 1980, it was an extraordinarily diverse, visually diverse array of images."

Tyson hopes the show will reach a wide group as well, and he wants to specifically target adults with messages of science.

"I'm worried about scientifically illiterate adults," Tyson said. "They run the world and wield resources. They're in charge, and they outnumber the kids … The issue in modern time is, do adults have the wisdom and insight brought to you by scientific perspective to actually lead this world into the future? … If the adults in charge don't have it, you are throwing seeds to foul ground."

"Cosmos" hosted an interactive webcast as part of a premiere event that was beamed from Los Angeles into planetariums and other spaces around the world Tuesday. You can watch a full replay of the broadcast here: http://new.livestream.com/fox/cosmosliveevent