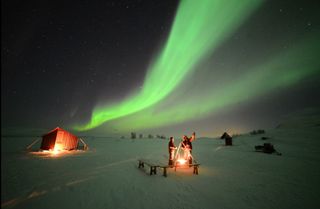 Northern lights glow over skywatchers high in the Swedish mountains on Feb. 21, 2014 in this image from the video “Lights Over Lapland” by Chad Blakley.
(Image: © Chad Blakley | ligthsoverlapland.com)

The northern lights dance in a breathtaking display in these stunning images from an aurora video recently sent to Space.com.

"This display was one of the best of the year and we are hopeful that the final four weeks of the season will continue to impress," Blakley wrote Space.com in an email. "The show started as soon as the sun went down and continued well into the night — long after my cameras had frozen and all of my batteries had died." [See more amazing aurora by Blakley and other stargazers]

"Before we know it, the midnight sun will return and we will have to patiently wait for the auroras to return later this autumn," Blakley said.